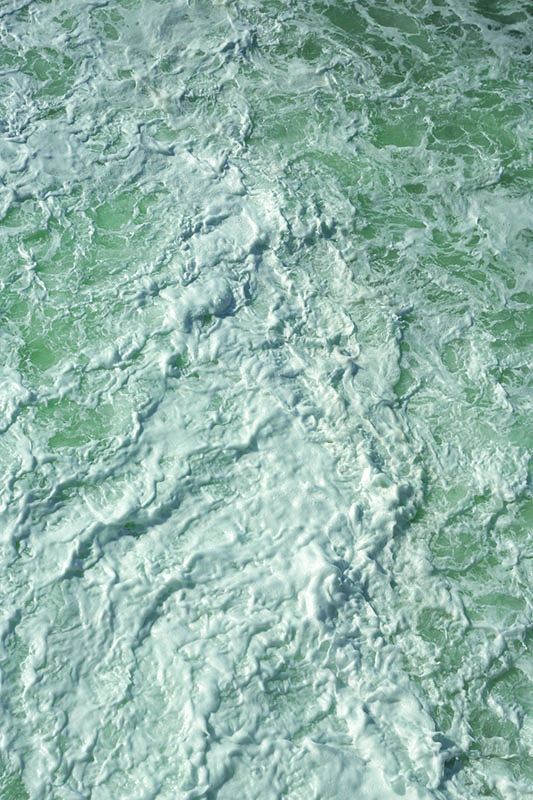 Viviane Sassen, from the series Umbra

There is time, we say, rippling
as long ribbons in the hair
of a girl looking back.

We see a bright past in her hand.
We can imagine her on certain days
in various poses and say: future.

Umbra: An Interview with Maria Barnas, by Federica Chiocchetti

Federica Chiocchetti: Could you tell us a bit about your collaboration with Viviane Sassen, how did it start (you also worked on the book Etan & Me) and how does it work. How do you choose the photographs and develop the sequencing of the book/s and the layout of the exhibition?

Maria Barnas: Viviane approached me to write on shadows. She was collecting existing work and making new work for her exhibition UMBRA in the Fotomuseum, Rotterdam. She showed me the sketches for her exhibition, some beautiful drawings, and some already finished works. Also she shared with me her own connections, memories, references to shadow, very generously. I really felt I entered a territory in which my own shadows merged into those of Viviane – and then somehow it was as if the shadow of humankind – no longer strictly a personal darkness, began to speak and manifest itself. I wrote in a way that was beyond simply writing about specific images, helped significantly by the open nature of Viviane’s work, which provoked all kinds of shadows. So in the end there were numerous combinations possible. The sequence and layout was done by the designer and Viviane, who asked me to suggest some ideas. We seemed to see the same strengths and possibilities.

FC: You are both a poet/writer and a visual artist how do you ‘divide’ yourself between the two practices?

MB: I don’t really have an answer to this. In my mind there is no difference, I do not have to divide myself in my mind. (It is not dissimilar from being a mother, a daughter and a friend at the same time – you are always the same person but different realities and contexts make you see different sides of the same person.) It is only the practical world that provokes different outcomes, forms. On the one hand it is my own practicality that keeps me from presenting images when I am asked to read poetry (although actually I should try it once) but there is also something more content driven, from inside the work – certain content asks for text, other for image – and sometimes I like to mix things up. Writing on shadow made me draw on a series of printed silhouettes – a certain way of ‘thinking’ in writing can inform a way of thinking in images. It is not so much a division, but rather a slalom I would say, that I make between writing and visual art – this produces a movement that keeps both practises running and alive.

FC: Is it the nature of the inspiration that you have that tells you the medium through which to express it?

MB: I have to try out a lot to see if it works. I also like trying things out. Sometimes I know straight away what shape a certain idea should take, which medium suits it best, but mostly I first do a lot of things that don’t really work at all. I rememebr once I even had to make a documentary film in Recife, Brazil to find out that eventually the vinyl (The Lost Park) that I made with the soundtrack of the film was the actual work. In a recent film I did, called The Vivid Garden, I explored the question if it is possible to evoke a garden (park) purely in language. The film was shot with a camera obscura, in London’s Kew Gardens. The camera is like a dead eye: it receives light but does not transfer it upright though the brains, resulting in a mainly shady world, turned upside down. Seeking for anything recognisable is the main visual drive, resulting in brittle imagery – reminiscent of the first experiments in film. In The Vivid Garden the absence of light is as important as the finding of bright details to hang on to. A blind woman leads us through the slowly emerging garden. Visually she can only perceive shades of light and vague contours. She mainly bases what she ‘sees’ on descriptions a friend gave her on prior visits to the garden, and on her imagination. From the grass under her feet to hallucinatory images like three-legged creatures, she evokes a new world – surpassing what any seeing person could ever come across. With this idea I knew straight away it could not be poetry or fiction – it had to be a document of something ‘real’ to evoke a fictional place – or some sort of new reality, if you like.

FC: How would you describe the relationship between photography and text?

MB: In artschool I was taught that it is useless to illustrate image with text or text with image – it would be too literal, and literal is the last you want to achieve, so I was told. But I find real joy in trying to actually illustrate a text with photographs. It is actually very hard to do so! And it evokes all kinds of wrongness, all kinds of distortion which is very fruitful.

FC: Could you explain the difference in your mind/emotions/approach, if any, between writing poetry in absolute freedom and writing a poem in response to a photograph?

MB: I can only write when I first make an assignment into my freedom – only then can it work. In the case of working with Viviane it is quite easy, because she asks me to take all the freedom I need.

FC: What does shadow mean to you? And what do you think it means for Viviane?

MB: It’s hard to answer that in a few lines. For me it is foremost what makes seeing possible. This struck me first when I read about the images that were caused by the bombing of Hiroshima. Most cameras were melted, which explains the small amount of images that remain. (One that we still have is the image of a clock. This melted clock haunts my poems. It is also somehow present in Umbra, in the clocks that refuse to change time). But the power of the bombing eradicated human beings – where they had been, shadows appeared on walls and staircases. During the flash – as long as their bodies held it out, photographs were produced – straight into space. I realised that sunlight, in a mild way, is always doing this. Producing photographic effects all over the place, every moment, as we speak/write.
The rest – with all associations and evasions is in the poems.

FC: Martin Heidegger once wrote that ‘no one can jump over his own shadow’. Despite what he actually meant with that sentence, I would like to know what it means for you, how would you interpret it.

MB: You have this one body, one mind from which you perceive – however hard I try to find different angles.

FC: Who is that ‘girl looking back’ in Shadow Speak?

MB: I am not sure. She is a girl. Any girl. And a specific girl, in this poem. She is ungraspable time, posing as a girl. She is also an impossibility, that you can name, almost grasp, but never fully understand. Maybe she is just a word.

FC: Do you believe in such a thing as ‘explaining’ a poem?

MB: Well I don’t mind giving it a try – as long as you know that I might explain it differently every time I make an attempt. In that sense you cannot explain poems often enough. I believe they grow, fold out and cause ripples all over the place as long as we continue to explain them. Who do you think the girl in the poem Shadow Speak is?

FC: I am not sure but she did evoke an image in my mind, the dawn, with its feeble yet forward-looking light. As you don’t mind giving it a try, I would like to explore a bit more the relationship between shadow and time in your poem. It would seem that you associate the idea of imagination with the concept of the future and the idea of looking (‘see’) with the past. Have I completely misunderstood? Could you reveal to us a bit more the stream of ideas that were crossing your mind when you composed that poem?

MB: I think I tried to go against the time-based stream of language: every sentence is a timeline in itself. It needs time to say something, you cannot go against time while saying something – but I tried to jump over my own shadow and give it a go. It is not about time from a personal point of view, but from a perspective beyond time.

FC: What do you see in Viviane’s photographs that made you accept the challenge of responding to them with your poetry?

MB: I am attracted by the brightness in her work that is never lightfooted – her brightness is the clarity of harsh analysis – the eye that looks so closely that has to dissect what it loves. And what I greatly admire in Vivianes photograph’s is the clear image – the power of a single image. There is a certain bluntness, braveness to her imagery, besides the glamorous and elegant layers that the work has as well. Much more than the image of a poet who can always hide behind the next word or hidden meaning. I recognise a longing for attachment in her work, which stems from a knowledge that there is no such thing as real attachment. everything is unstable, and never for ever – with death being never far away, even though she doesn’t push it in your face. There is humour too, a dark humour – the way in which Gogol or Babel can be humorous.

FC: Would you consider writing photo-poetry with other photographers as well?

MB: Yes, although it is rare that artists give me the freedom that Viviane gives. She doesn’t treat the text as a sideline, she gives it equal space. I am not sure many artists would be up for this – it needs equanimity and confidence to let someone else’s content be so close.

FC: Maria, thank you so much for sharing your most intimate thoughts with us. One last question: what are you currently working on?

MB: I am preparing an exhibition at Annet Gelink Galllery, in which I present several works that take as their starting point the dubious act of describing. The idea is to question whether it is really possible to describe anything and what are the effects that we produce in doing so, both in terms of image and text.

Maria Barnas is a Dutch artist that works with text and image. Both in her written and visual work, she takes the act of describing as her starting point, working with the shaping and distorting qualities of description. She is fascinated by what can go wrong, while trying to grasp what is right in front of us, and by what the edges of understanding look like? It is at these edges, she believes, where reality begins. Barnas builds narratives and alternative histories around images and what is presented as factual. An image, like a text, is not a closed container. It rarely depicts or describes what it sets out to. Barnas delves into the space between intention and the many possibilities of interpretation.
Her books are mainly published in Dutch, but she is currently working on a poetry book directly in English.

Umbra by Viviane Sassen and Maria Barnas is published by Oodee and you can find more info on where to buy it here.