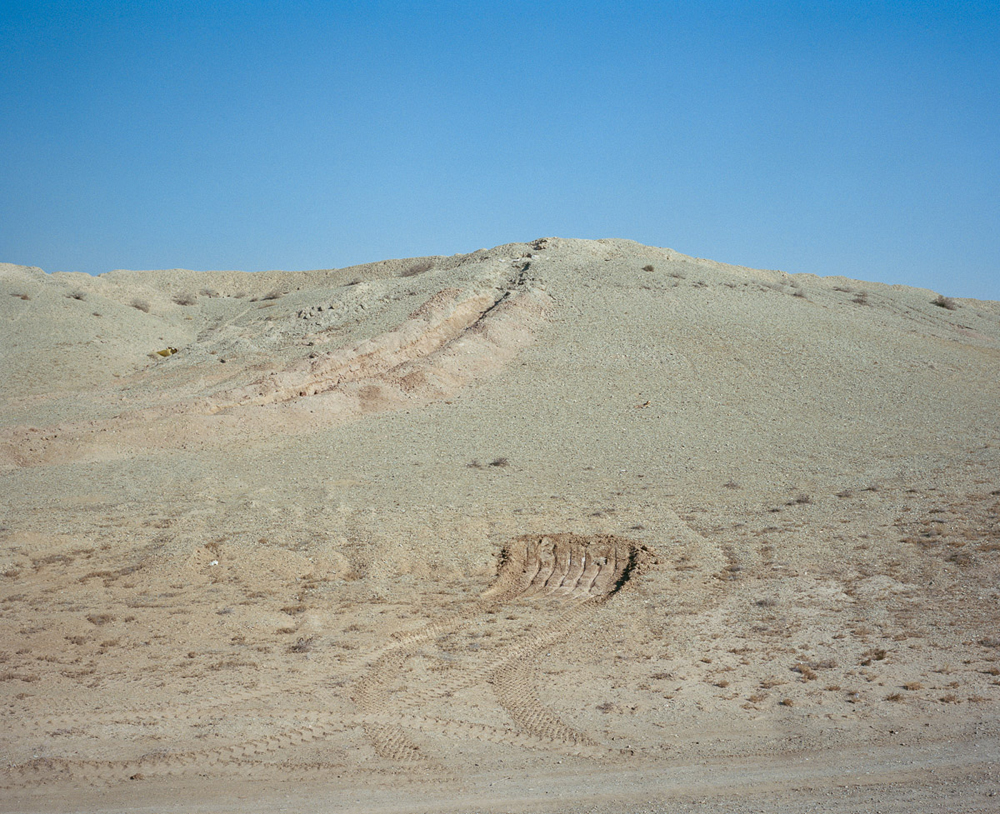 Wawrzyniec Kolbusz, from the series Sacred Defence, 2015, courtesy the artist

And they marched forth unto the meeting place, and the earth groaned under the feet of the war elephants. And for seven days did the battle rage fast and furious, and all the earth was darkened with the black dust […] and it was a combat such as none hath seen the like. But victory leaned to neither side.

Excerpt from Shahnameh: The Epic of the Persian Kings (1010 CE), by Abolqasem Ferdowsi, translated by Helen Zimmern, 1882

Tracks in the sun-scorched earth leave a trace of past combat. Like scars upon the desert landscape, these marks reveal the consequences of war, a reminder of lives lost and blood shed.

When we learn that this image was taken in Iran, we may think of recent conflicts or historical battles, perhaps even the bitter eight-year war of the 1980s between Iraq and Iran. But this is not a real site of conflict – it is a fabricated space, entirely fictional, part of what is known as ‘Cinema City’, where permanent film sets are used to make war movies.

The image belongs to the series Sacred Defence, by Polish photographer Wawrzyniec Kolbusz, who explores Iranian war film sets in an attempt to question fabricated contemporary depictions of warfare – reconstructed realities. In his series, Kolbusz also photographs inside museums in Iran, where he documents wax replicas of martyrs and restaged war scenes. These museums are intended to memorialise historical conflicts and to help heal past trauma, he says, but the government also uses them to play on peoples’ emotions as a way to leverage political power.

Elsewhere, the series features digitally altered satellite images of Iranian nuclear sites in which the photographer inserts glimpses of destroyed buildings. He then places the manipulated images alongside the originals to create a ‘new war-related simulacra’ and to pass comment on the media and its manipulation of the real.

Kolbusz describes his series as ‘a game’ that plays with viewer expectations, leading us to believe we are looking at images of war when the reality is in fact very different. The above excerpt from the 11th-century epic poem of Iran, Shahnameh, feels almost universal; it could be representative of all conflicts at any point in time – a reminder of the futility of war and our inability to learn from past misadventure. The ancient words, vividly describing the brutalities of a remote combat ‘such as none hath seen the like’, and the image, alluding to a staged aftermath, form a somewhat terrifying juxtaposition, blurring the line between real and imaginary conflicts.

If we can take anything away from this it is, perhaps, the complexities of contemporary conflict. No longer are battles exclusively played out on the earth between two opposing sides as Shahnameh tells us. Modern warfare is multilayered, networked and propagandistic. War can be played out virtually, and is often, as Kolbusz reminds us, not as it seems. And it is perhaps all the more terrifying because of this. GP

Wawrzyniec Kolbusz lives and works in Warsaw. In his works, Kolbusz engages with the topics of simulation, substitution and reference as applied to the phenomenon of how the imagery itself tantalises the viewer. His artistic interest revolves around the hidden or generally unrealised patterns of social, cultural and political behaviour, approached from the conceptual angle. Kolbusz often uses the aesthetics of minimalistic language to communicate. His works are marked by ambiguity and the relationship between medium and politics.

Gemma Padley is a freelance journalist and editor specialising in photography. From 2012 to 2014 she worked at British Journal of Photography and still regularly contributes to the magazine.

This feature was first published in The British Journal of Photography, in the July 2015 print issue, as part of the Photocaptionist’s guest editing of the Endframe column.