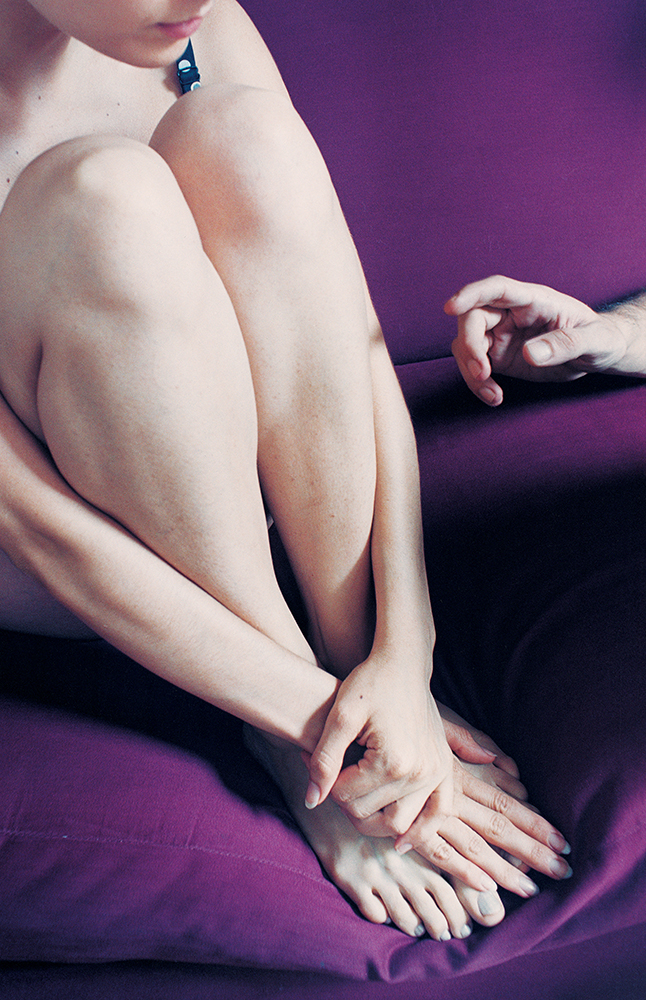 The first lie Julio told Emilia was that he had read Marcel Proust. He didn’t usually lie about reading, but that second night, when they both knew they were starting something, and that that something, however long it lasted, was going to be important, that night Julio made his voice resonant and feigned intimacy, and said that, yes, he had read Proust, at the age of seventeen […] That same night Emilia lied to Julio for the first time, and the lie was, also, that she had read Marcel Proust.

Every once in a while, an image and a text have such an impeccably revelatory encounter that to add anything else to the pairing almost seems superfluous. You are afraid of breaking the spell.

When I first saw Elinor Carucci’s image Eran almost touches me, with its sensual attempt to cloud the viewer by enmeshing past and future in a gesture that both hints at “continuity and separation”, I felt very confused. Initially, a passage from TS Eliot’s 1936 poem Burnt Norton popped into my mind:

at the still point, there the dance is,
But neither arrest nor movement. And do not call it fixity,
Where past and future are gathered.

Eran’s hand movement, towards Elinor’s leg, is captured in its very act of taking shape, frozen as something “always ahead” yet “never quite a attained” – to borrow an expression from Edward Weston, when he compared love with art in his intimate 1961 Daybooks.

A lingering look suggests that time is not the only element at stake and challenged in the image. In Chilean writer Alejandro Zambra’s excerpt from his novella Bonsai, Julio and Emilia know they are about to start something that will be important. Yet they feel the need to celebrate the moment with the feigned intimacy of an innocent lie – they both pretend to have read Marcel Proust. There is a sense that the books one has yet to read reinforce the freedom and the very existence of a future. However, Julio and Emilia can only savour this liberating feeling individually, as they lied to each other. In a way they simultaneously touch each other and they don’t.

There are solitary voids and a sensual yearning to be exactly the person the partner is looking for. To have not read Proust, among certain couples, can be a divisive issue, but here it functions as a mere symbol for the concept of void. Lurking behind the somewhat schizophrenic and terrifying ‘dance’ between voids and complicity, intimacy and estrangement there is the fear of not belonging to a similar wavelength or gravitating on the same orbit. The fear of almost touching each other, but not quite. FC

Elinor Carucci graduated in 1995 from Bezalel Academy of Arts and Design with a degree in photography. Her work has been exhibited in galleries around the word including, among others, James Hyman, Gagosian, The Museum of Modern Art and The Photographers’ Gallery. Carucci has been awarded The Guggenheim Fellowship (2002), the International Center of Photography Infinity Award for Young Photographer (2001) and the NYFA (2010). She has published two monographs: Closer (Chronicle Books, 2002) and Diary of a dancer (Steidl/Mack, 2005). Currently she is a faculty member of the graduate program in photography at the School of Visual Arts in New York and is represented by Edwynn Houk Gallery.

Alejandro Zambra is a Chilean writer. He is the author of My Documents, which was a finalist for the Frank O’Connor International Short Story Award, and three previous novels: Ways of Going Home, The Private Lives of Trees, and Bonsai, now a major motion picture. His books have been translated into more than ten languages and have received several international prizes. His stories have appeared in the New Yorker, the Paris Review, Harper’s, Tin House, and McSweeney’s, among others. In 2010, he was named one of Granta’s Best Young Spanish-Language Novelists, and he is a 2015–16 Cullman Center fellow at the New York Public Library. He teaches literature at Diego Portales University, in Santiago, Chile. You can read a short story from his acclaimed collection My Documents on VICE.

This feature was first published in The British Journal of Photography, in the December 2015 print issue, as part of the Photocaptionist’s guest editing of the Endframe column. It was crafted to launch the exhibition Feminine Masculine, which took place in January 2016 in London. It is now published here to coincide with the collective, intimate, undisciplined and experimental event entitled Genre: Unique! curated by Annakarin Quinto of leboudoir2.0 on genre dynamics, identity confusion, freedom of expression and respect towards diversity and difference, as part of Photo Saint Germain on 16 November, 2017. The Photocaptionist is delighted to be part of Genre: Unique! with an intimate corner that reinterpretates our exhibition Feminine Masculine: On the Struggle and Fascination of Dealing with the Other Sex.