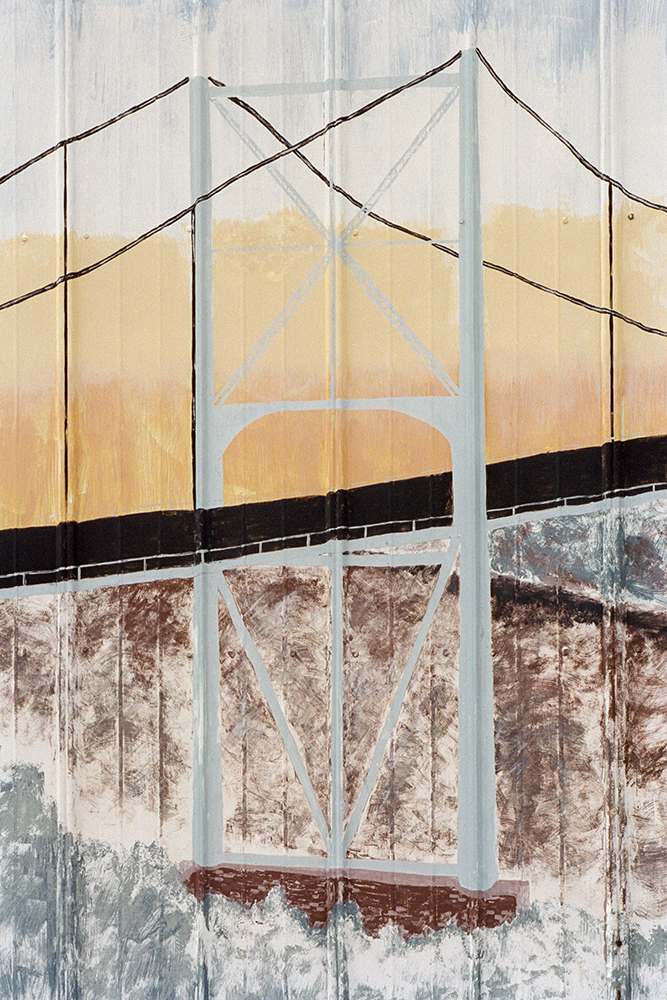 The first sentence of every novel should be: trust me, this will take time but there is order here, very faint, very human. Meander if you want to get to town.

Michael Ondaatje
In the Skin of a Lion
1987

Shea & Ondaatje: Meander If You Want to Get to Town, by Joanna Cresswell

“Within two years of 1066, work began on the Bayeux Tapestry [and] Constantin the African brought Greek medicine to the western world,” writes Michael Ondaatje in his 1987 novel, In the Skin of a Lion. By linking these two seemingly disparate moments of history, he demonstrates “the chaos and tumble of events”.

A frame narrative is a technique used in literature to provide structure to a series of otherwise unrelated stories. It’s also extended into the worlds of cinema and photography, where it’s now not unusual to see multiple stories unfolding against the rumbling backdrop of great events that unite them.

In the Skin of a Lion is a fictionalised account of Toronto in the early 20th century, and is widely understood to have been written to give voice to the migrants not remembered in the city’s official history, despite their efforts in building great landmarks such as the Prince Edward Viaduct. Just across the water from the Golden Horseshoe of Ondaatje’s novel is the great Rust Belt of America, and together these areas comprised one of the world’s major manufacturing regions.

Daniel Shea has been making photographic work about the Rust Belt for several years, and his latest project, Blisner, IL, presents an imaginary, archetypal town from the area. His work explores the social, historical and cultural consequences of the industrialisation and deindustrialisation of the region through a visual chronology of the past 100 or so years.

Both projects, in different ways, look at how our perception of reality is structured through storytelling. Ondaatje weaves in real, though absurd, contemporary events – a nun swept from a bridge, a local millionaire disappearing without a trace; Shea photographs real places and people, while questioning how photography can be used to create documentary fictions.

“The reader’s trust in Ondaatje is sorely tried,” wrote one New York Times critic of the novel, and these words also resonate through Shea’s work: trust is key.

The two have other common themes – both poetic works, approached by sensitive narrators, they are concerned with the discursive and human consequences of labour, of histories told and retold, written and rewritten, of order and disorder, of community and love. By questioning their respective media, these storytellers implore audiences to follow quiet, ambling narratives that obfuscate more linear traditions in favour of subjective histories for us to unfold.

Daniel Shea is a New York-based artist intrigued and energized by the density and chaos of the city. Following a BFA at Maryland Institute College of Art, Baltimore, MD (2007), he gained an MFA from the University of Illinois at Chicago, Chicago, IL, in 2013. His books Blisner Ill. and Blisner IL focuse on mid-sized cities in Southern Illinois and how they attempt to maintain the veneer of their once industrially-prosperous moment. International solo shows include Alt. +1000, Switzerland (2011) and Centre for Art and Culture, Aix-en-Provence, France (2005). His work has also been included in exhibitions at the Moscow Museum of Modern Art (2012), Museo de Art Acarigua-Araure, Venezuela (2012), Asia Society, Beijing, China (2011), and IUAV Gallery, Venice, Italy (2008). He is represented by Webber and Andrew Rafacz. He won the Foam Paul Huf Award 2018.

Joanna Creswell is a London-based curator and editor specialising in photography and culture. Her writing has appeared in 1000 Words, Aperture/The PhotoBook Review, AnOther, The British Journal of Photography, Co-Curate Magazine, Dazed, HotShoe International, i-D, Paper Journal, The Photographers’ Gallery, Photomonitor, The Plantation Journal, Refinery29, Self Publish, Be Happy, This is Tomorrow, and more. Cresswell is the current editor of Unseen Magazine.

This feature was first published in The British Journal of Photography, in the August 2015 print issue, as part of the Photocaptionist’s guest editing of the Endframe column.