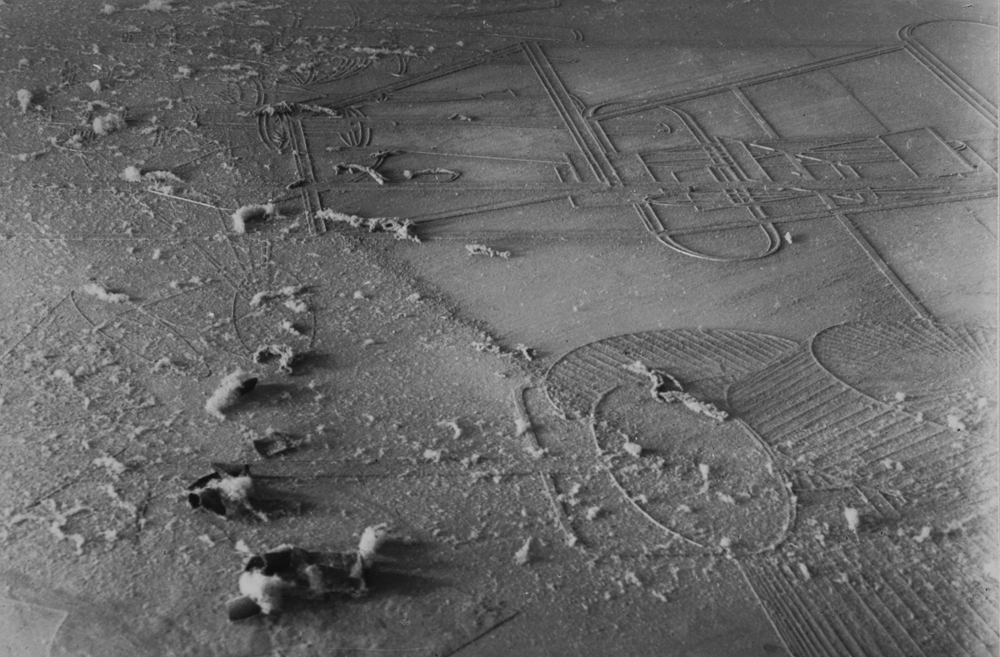 A photograph is like something lying on the floor and accumulating dust, you know, where these clumps of dust get caught, and it steadily becomes a bigger ball. Eventually you can pull out strings. That’s roughly how it is. 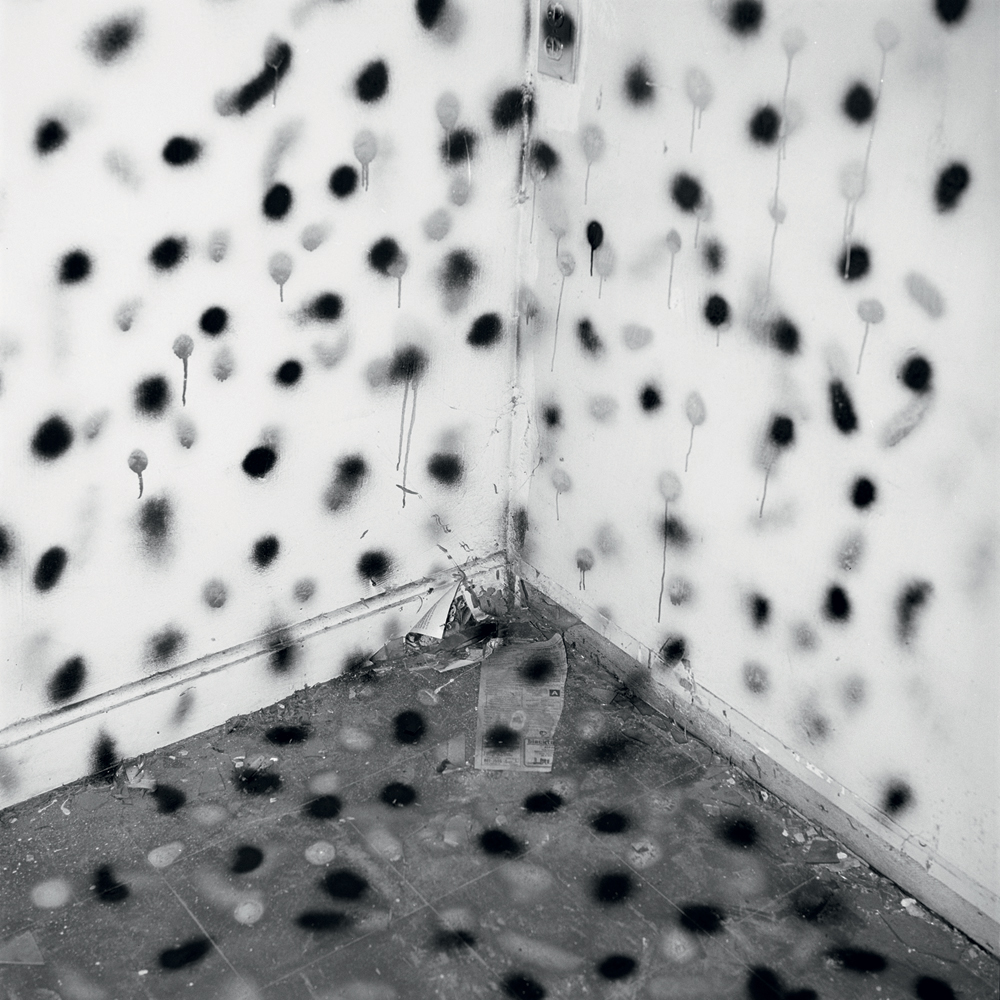 John Divola, from the series The Vandalism Portfolio, 1974 - 75, courtesy the artist and Gallery Luisotti

On the varnished tabletop the dust has marked the place occupied for a while – for a few hours, a few days, minutes, weeks – by small objects since removed, the bases of which are clearly outlined for a while longer, a circle, a square, a rectangle, other less simple forms, some of them partly overlapping, already blurred or half-erased as if by the flick of a rag. 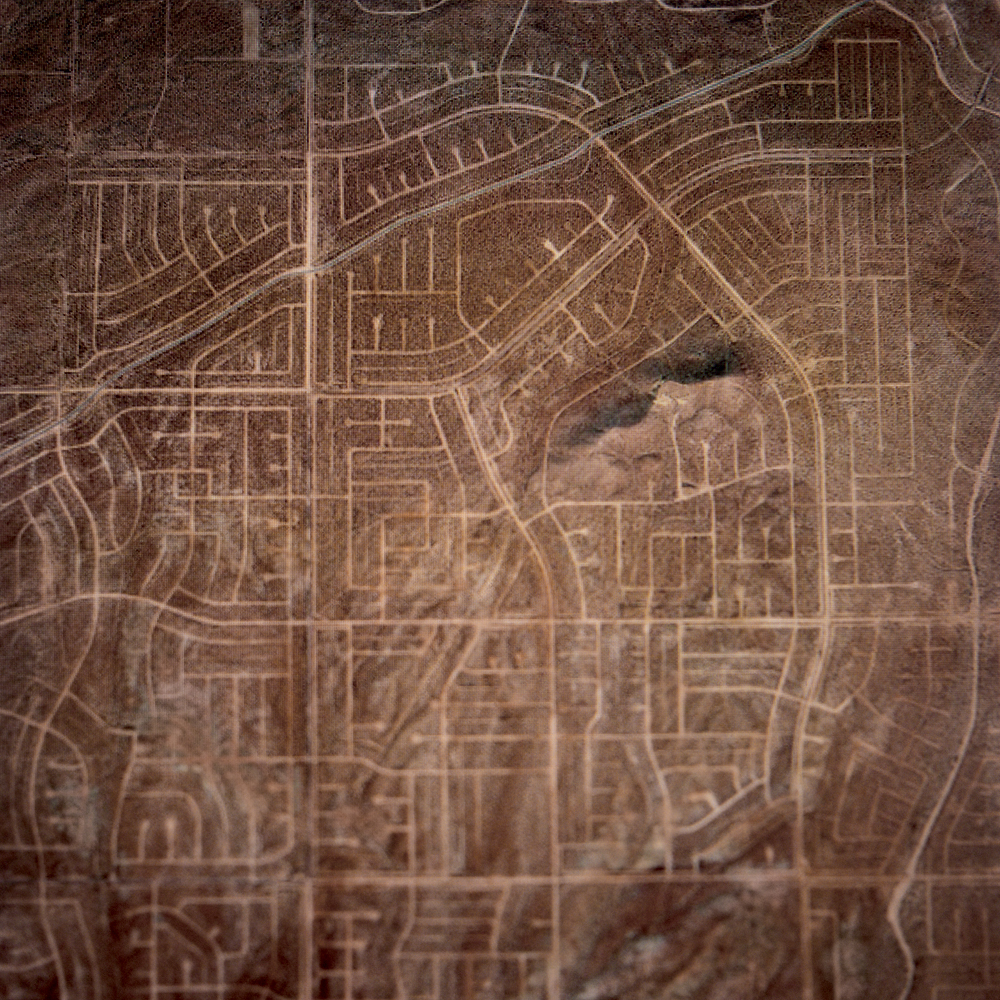 We headed almost straight east of Paris, rising in the air as if we were sitting inside a boat that was being lifted by some giant and the ground began to flatten out beneath us. It looked cut into brown squares, yellow squares, and big flat blotches of green where there was a forest. I began to understand cubist painting. 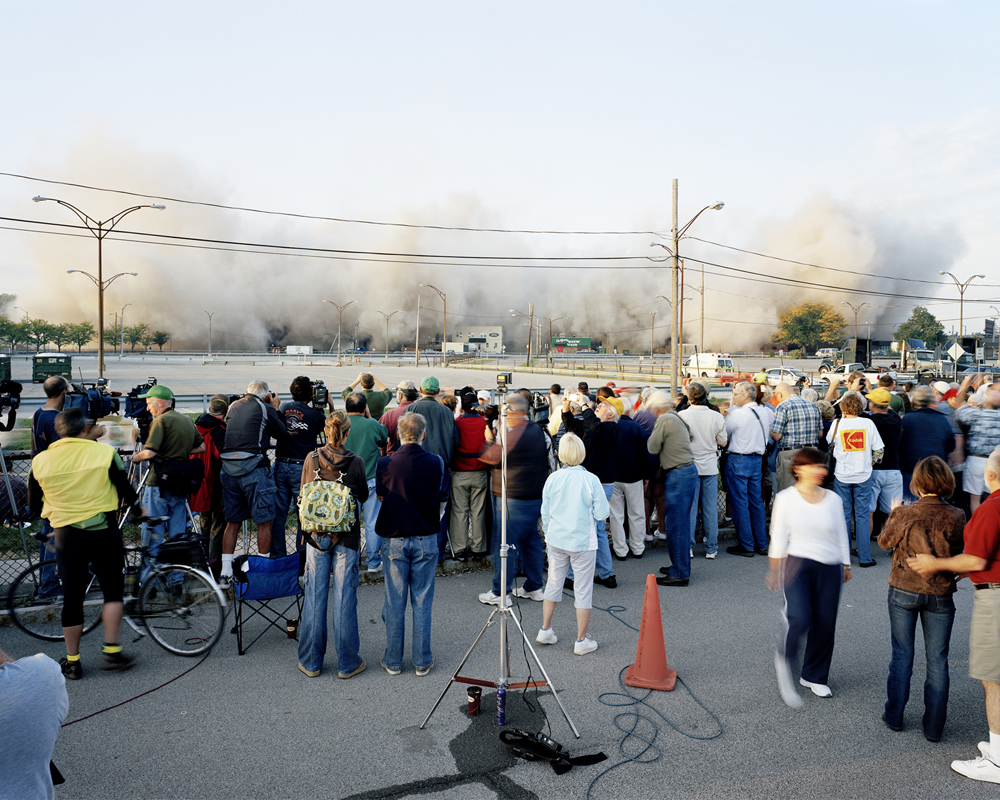 The everyday escapes. In this consists its strangeness — the familiar showing itself  (but already dispersing) in the guise of the astonishing. 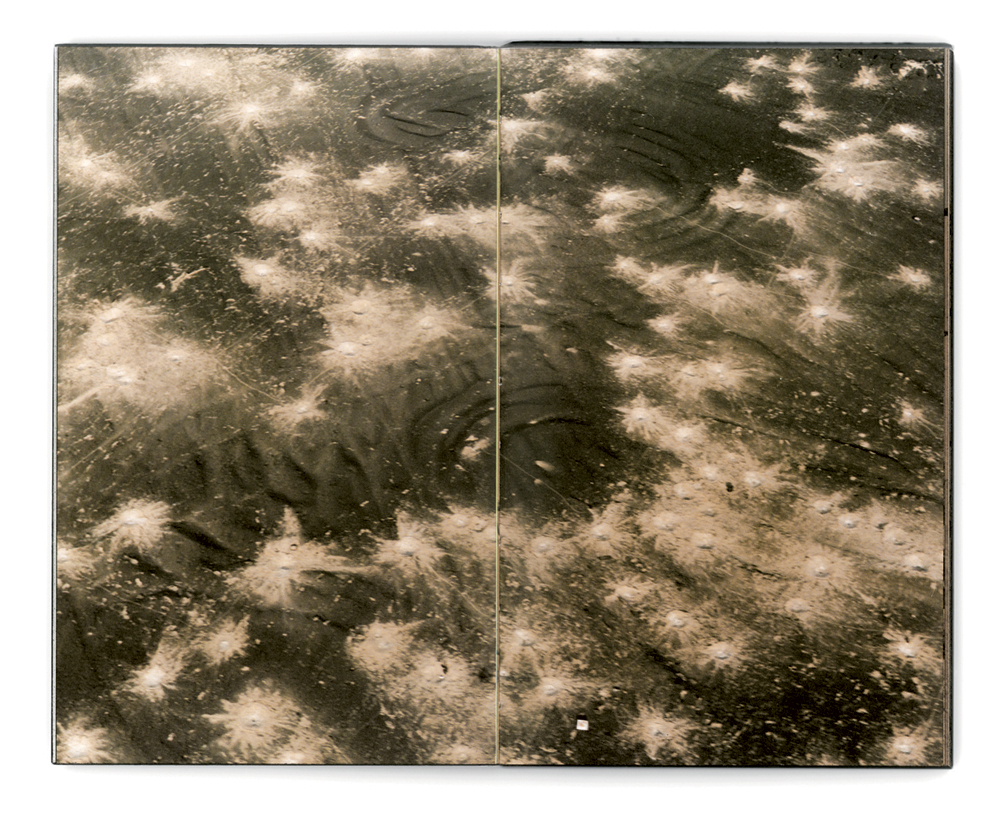 David Campany: a Handful of Dust, by Lisa Stein

In the opening lines of Poussière [Dust], the French novelist and critic George Bataille reimagines a well-known fairy tale: ‘the storytellers have not realised that the Sleeping Beauty would have awoken covered in a thick layer of dust; nor have they envisaged the sinister spiders’ webs that would have been torn apart at the first movement of her red tresses […]’ [1]. What strikes the reader about these two simple sentences is the way in which they foreground a substance which, despite being part of our everyday lives, has been relegated to the edges of our consciousness. So great is our aversion to dust that we are willing to ignore its reality, to overlook its very materiality. I remember reading Bataille’s entry for the first time and, if only for a brief moment, feeling ashamed; I too had bought into the sterile fairy tale. However, I soon realised it was not its subject matter that made Poussière unsettling; on the contrary, I found Bataille’s prediction that dust would one day ‘gain ground over domestics, invading the immense ruins of abandoned buildings [and] deserted dockyards’ oddly calming. Rather, my sense of shame seemed to emerge from what Bataille did not say.

Like Poussière the photograph at the center of David Campany’s exhibition a Handful of Dust, which depicts a sheet of glass covered in (a) layer(s) of fine dry powder, restores the unwanted substance to consciousness. Still, it is not what Dust Breeding actually depicts that makes it the ‘enduring and revealing’ photograph Campany, who first encountered the image in the late 1980s, recognises it to be; the photograph, taken by Man Ray in Marcel Duchamp’s Manhattan studio, is neither an accurate representation of Duchamp’s artwork La Mariée mise à nu par ses célibataires, même [The Bride Stripped Bare By Her Bachelors, Even], nor is it an objective depiction of dust. The significance of Dust Breeding seems to lie in what it does not depict. Indeed, in the book that accompanies the exhibition Campany explores what has emerged from Man Ray’s enigmatic image over time; it is not what the photograph is of, but what it could be that led to its appropriation by various art movements. Moreover, Dust Breeding transcended art-historical discourse and proved, as Campany observes, ‘an unlikely counterpoint to military imaging, forensics, documentary practices, photojournalism and reportage […]’ [2]. Finally, the photograph inspired a range of artistic and, evidently, curatorial practices.

Drawing on the above quote by the German writer and academic Winfried Georg Sebald I would like to suggest that the meaning of a photograph should be sought in what follows its circulation [3]. A photograph, he writes, ‘is like something lying on the floor and accumulating dust, […] where these clumps of dust get caught, and it steadily becomes a bigger ball. Eventually you can pull out strings […]’. What Sebald seems to suggest is that initially—minutes, hours, perhaps even days after it has been captured—a photograph is devoid of meaning. Only over time does it ‘collect’ layers, of memories, stories, ideas until one day, (a) concept(s) might emerge from this random accumulation. Viewed in this way the photograph does not, as Barthes famously suggested, indicate what ‘has-been’, which places emphasis on the causal link between the object photographed and the photographic image, but what ‘is-not-yet’. Rather than extract being from the flow of time the photograph, infinitely effable, brings into being. It is this notion of potential that brings me back to Bataille, whose mention in a Handful of Dust becomes interesting for a different, yet not entirely unrelated, reason.

At the core of Bataille’s work was his total embrace of the experience of ‘not-knowing’, which he believed to be prerequisite for the creative act. However, Bataille did not place what he referred to as ‘nonknowledge’ outside, or in contradiction to knowledge. Rather, it denotes a type of knowing that lies somewhere between thinking and being. I would like to use the story of the inception of Dust Breeding to illustrate how this dimension of (not-)knowing might enter into the act of taking a photograph, as well as our experience of it. Perhaps the most interesting aspect of Man Ray’s photograph is that, while its ambiguous appearance was not purely accidental, it was also not entirely deliberate. In chapter one of Campany’s essay we learn that Man Ray actually took the photograph ‘in preparation’ for another commission he had only accepted out of financial necessity. When he visited Duchamp’s studio in January of 1920 the artist’s Large Glass provided Man Ray with the ideal opportunity to practice photographing artworks other than his own. He set up the camera in front of the glass, which to him ‘appeared like some strange landscape from a bird’s-eye view’ [4], opened the shutter and, together with Duchamp, left the studio to have something to eat.

Initially, then, Dust Breeding was meant to be nothing more than an exercise, a means to an end, its outcome left entirely to chance; after all, the ‘single unshaded lightbulb’ illuminating Duchamp’s glass could have burned out. However, Man Ray’s description of the scene suggests intention: he catches a glimpse of something that is not there, yet; he was not actually viewing a landscape from a bird’s eye view nor had the image, which could be seen as an aerial view, been taken. Returning to Bataille, we could say that Dust Breeding is a visual manifestation of a thought that was ‘not-yet’—both in the mind of the photographer and in the minds of those yet to see the image—and that the potential of the photograph, and all of its possible uses and various interpretations existed even before it was taken. Like Bataille’s entry in the critical dictionary, the ‘nonknowledge’ inherent in Dust Breeding, or, more generally, the creative potential lying dormant in any photograph, is perhaps more important than the subject matter of the individual image itself. It is what might emerge from the gap—the unknown, the unseen—by which we can eventually, in time, measure, if we must, the quality of a photograph.

[3] I first suggested that the meaning of a photograph might lie in what follows its circulation in an article published by Four by Three Magazine in September 2015. The article, a response to an interview with Francis Hodgson, considered the social and political response to the photograph of Aylan Kurdi.

David Campany is a writer, curator and artist, working mainly with photography. His books include A Handful of Dust, The Open Road: Photography and the American Road Trip, Walker Evans: The Magazine Work  and Jeff Wall: Picture for Women. He also writes for Frieze, Aperture, Art Review, FOAM, Source, Photoworks and Tate magazine. For his writing, Campany has received the ICP Infinity Award, the Kraszna-Krausz Book Award, the Alice Award, a Deutscher Fotobuchpreis, and the Royal Photographic Society’s award for writing. His recent curatorial projects include Dust (Le Bal, Paris) Walker Evans: Anonymous (various venues in France, Belgium, Italy, Australia and New Zealand), Lewis Baltz: Common Objects (Le Bal, Paris) and Victor Burgin: A Sense of Place (AmbikaP3 London). David has a Phd and teaches at the University of Westminster, London.