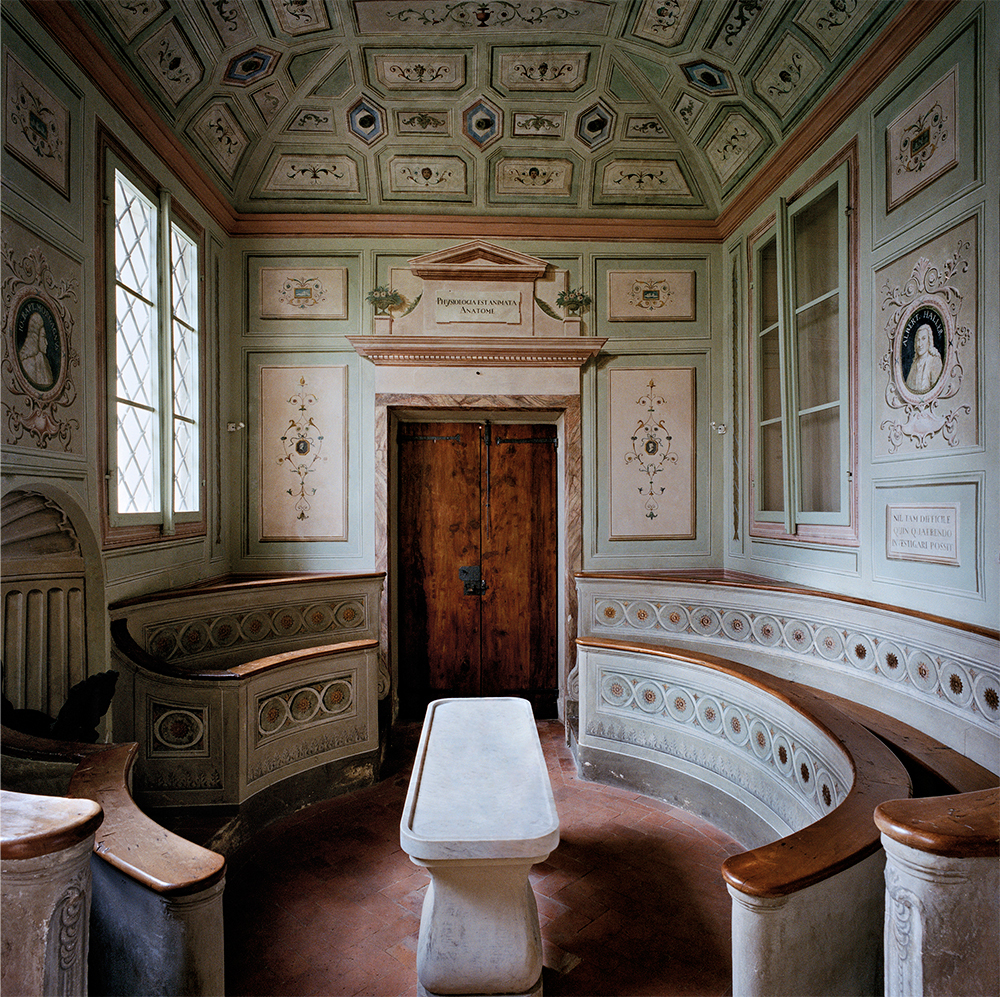 All bodies, then, living and dead, clothed and naked, man and animal, are potential subjects of dissection, and all share with the cadaver the anatomizing gaze of the onlookers; the spectators themselves from spectacles both for one another and for the outside observer.

Luke Wilson
‘The Performance of the Body in the Renaissance Theater of Anatomy’
in Representations 17, 1987 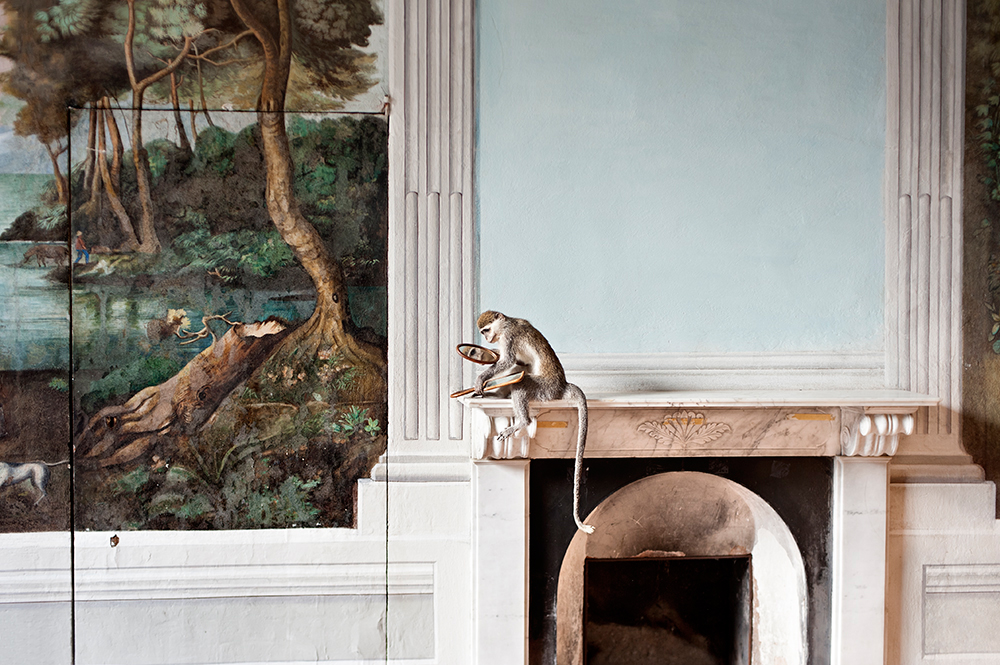 Francesca Catastini, Know Thyself, from the series The Modern Spirit is Vivisective, 2016, courtesy the artist

Whosever doth well know himself, knoweth all things… First he shall know God, because he is fashioned and framed according to this image, by reason whereoh, he is called among the Divines, the Royal and the Imperial Temple of God; […] he shall know the brute beasts, because he hath the faculties and sence and appetite common with them. 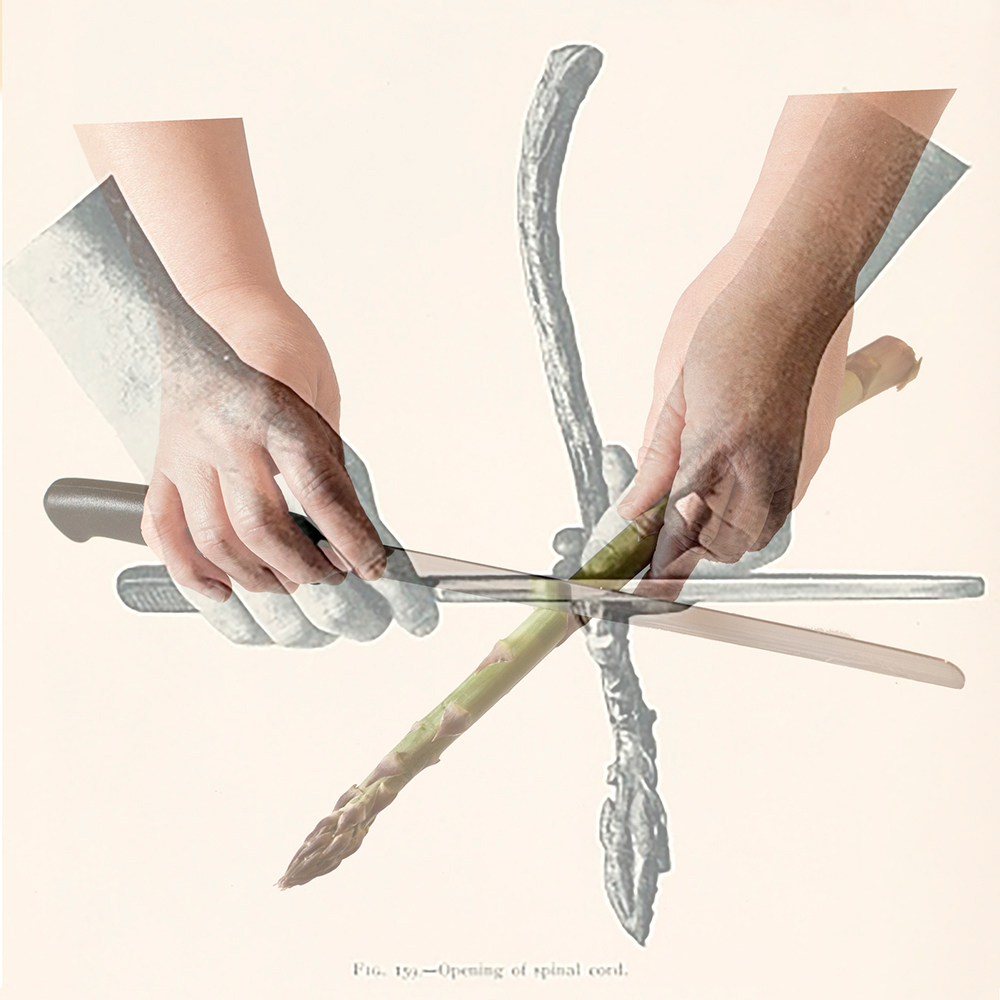 Francesca Catastini, Opening a Spinal Cord, Cutting an Asparagus, from the series The Modern Spirit is Vivisective, 2016, courtesy the artist

Provide yourself with a large strong knife. 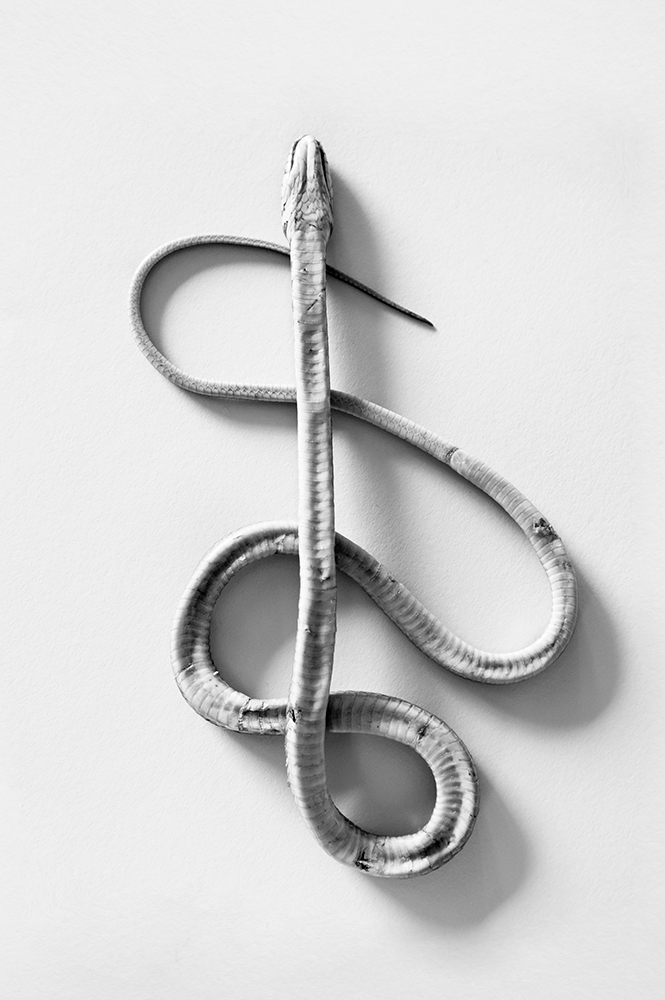 Francesca Catastini, Rod of Asclepius, from the series The Modern Spirit is Vivisective, 2016, courtesy the artist

Poison is in everything, and no thing is without poison. The dosage makes it either a poison or a remedy. 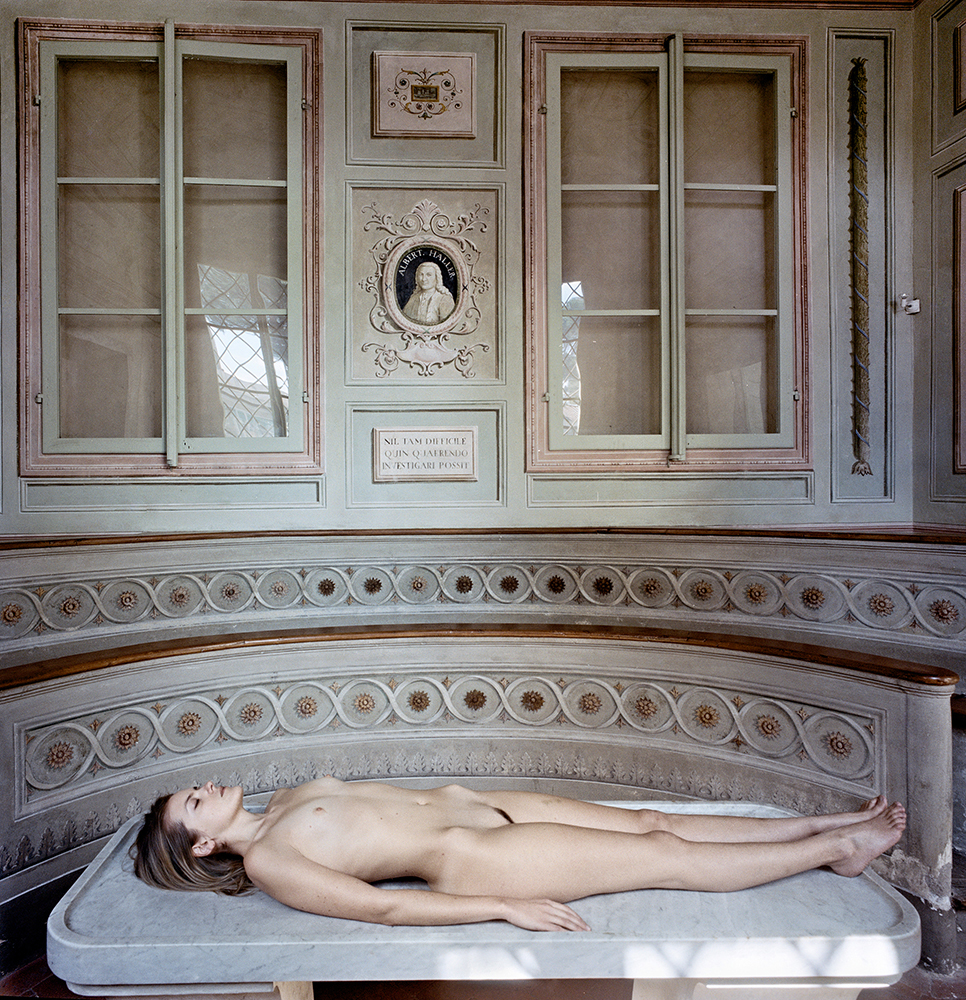 I think that such a structure (the clitoris) appears in hermaphrodites who otherwise have well formed genitals, but I have never once seen in any woman a penis or even the rudiments of a tiny phallus.

Just as the dissection of the dead teaches us very accurately the number, the site, the figure, the property of the substance, and the composition of each part, so in addition the dissection of the living animal both shows the function of each part very clearly, and also conveniently presents lines of reasoning for discovering function. This is why students rightly start by being trained on dead animals, so that afterwards when they want to investigate the action and use of the parts, they may move straight on to the live animal. 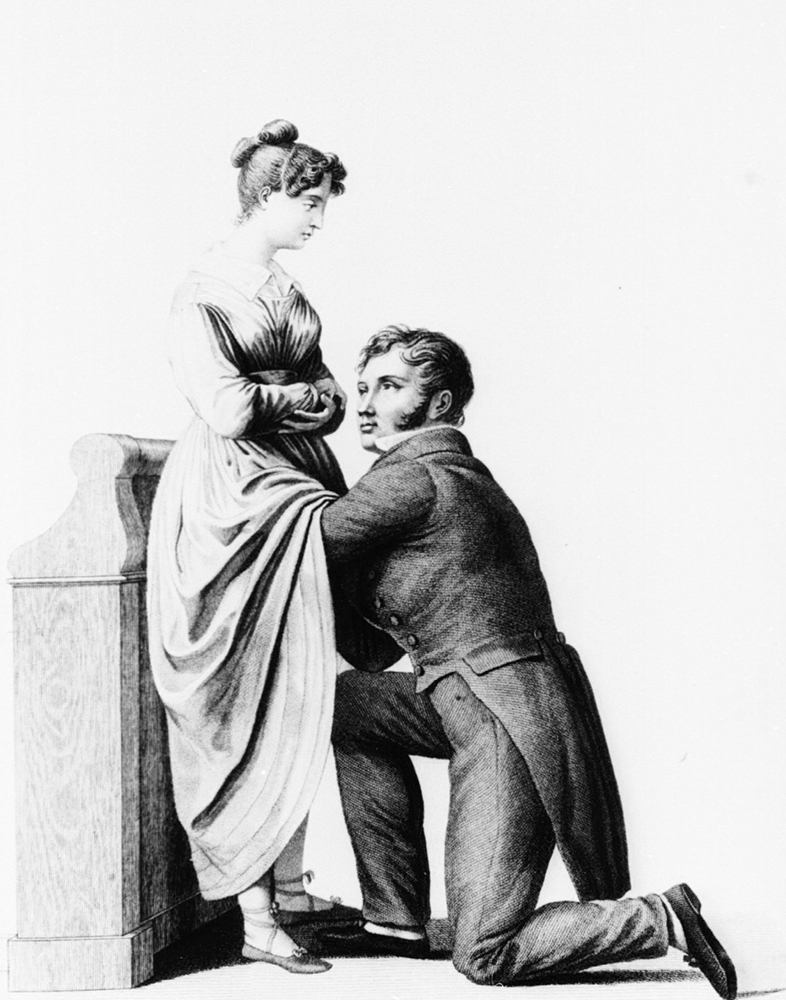 Obstetrical examination / Nouvelles démonstrations d'accouchemens (1822), from the series The Modern Spirit is Vivisective, 2016, courtesy the artist

When our eyes touch is it day or is it night? 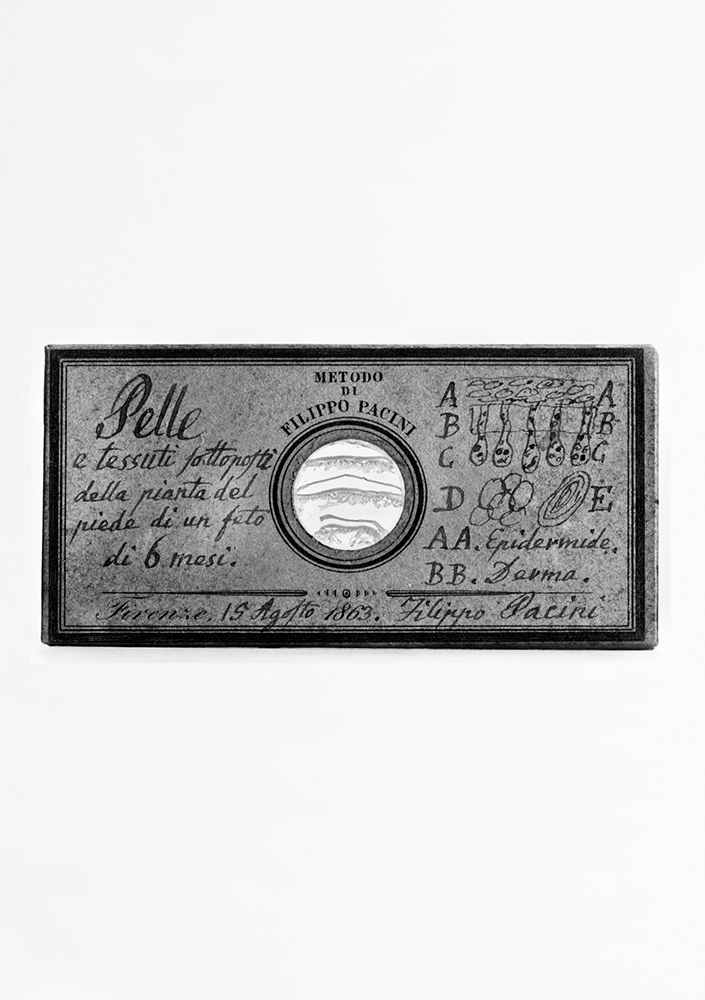 Skin, Microscope Slide, from the series The Modern Spirit is Vivisective, 2016, courtesy the artist

You yourself should feel with your own hands, and trust them. 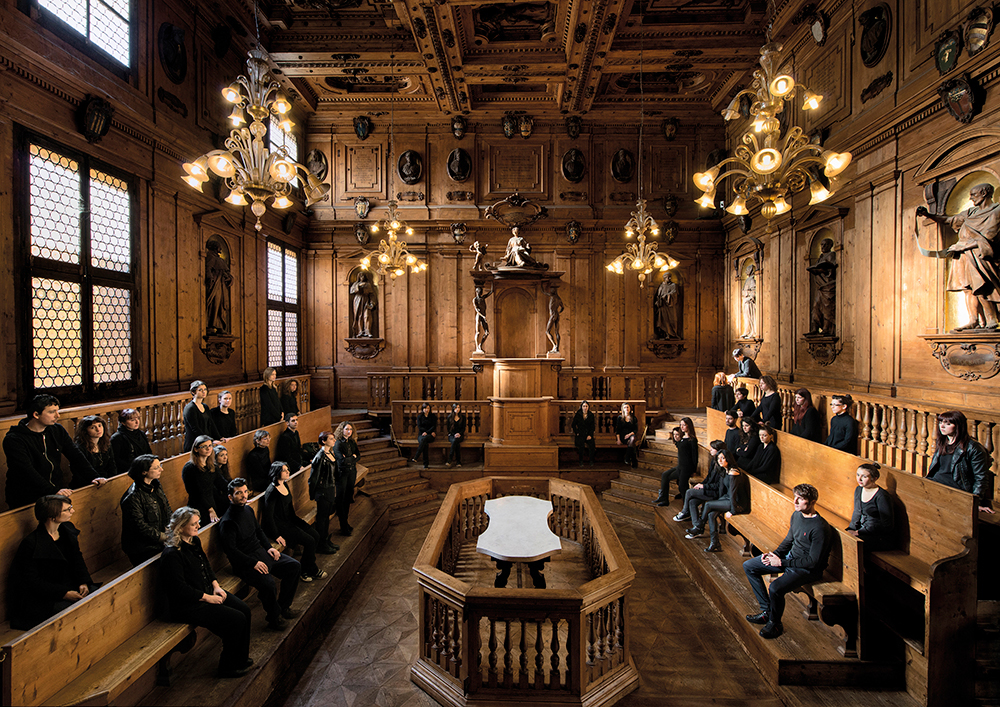 Francesca Catastini, The Audience, Palazzo dell'Archiginnasio, Bologna, from the series The Modern Spirit is Vivisective, 2016, courtesy the artist

Symmetry is a proper agreement between the members of the work itself, and relation between the different parts and the whole general scheme, in accordance with a certain part selected as standard. Thus in the human body there is a kind of symmetrical harmony between forearm, foot, palm, finger, and other small parts; and so it is with perfect buildings. 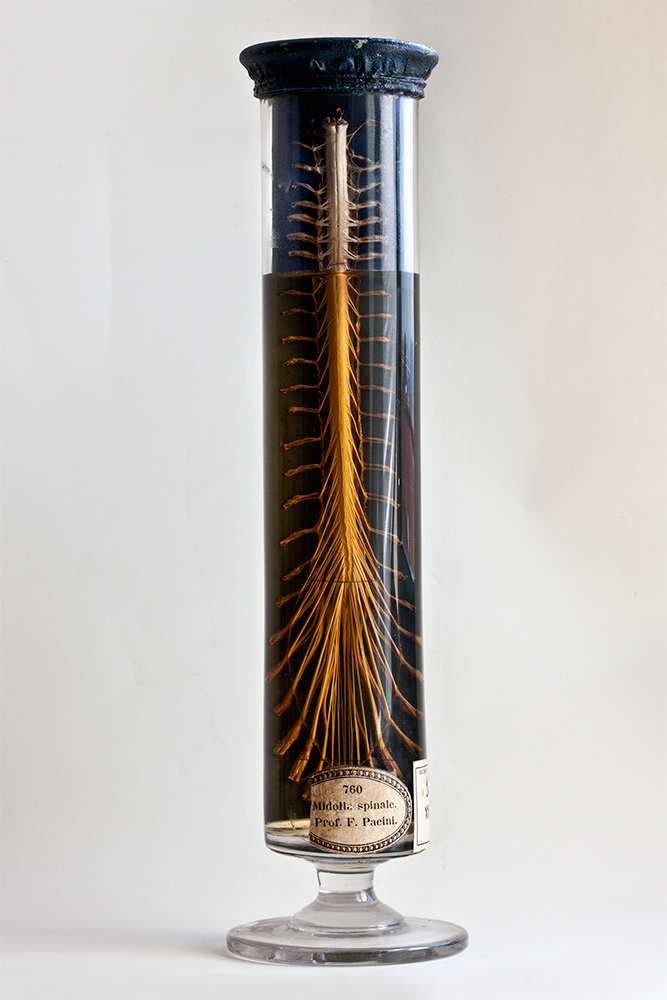 Francesca Catastini, Spinal cord Specimen, from the series The Modern Spirit is Vivisective, 2016, courtesy the artist

Knowledge is not made for understanding; it is made for cutting. 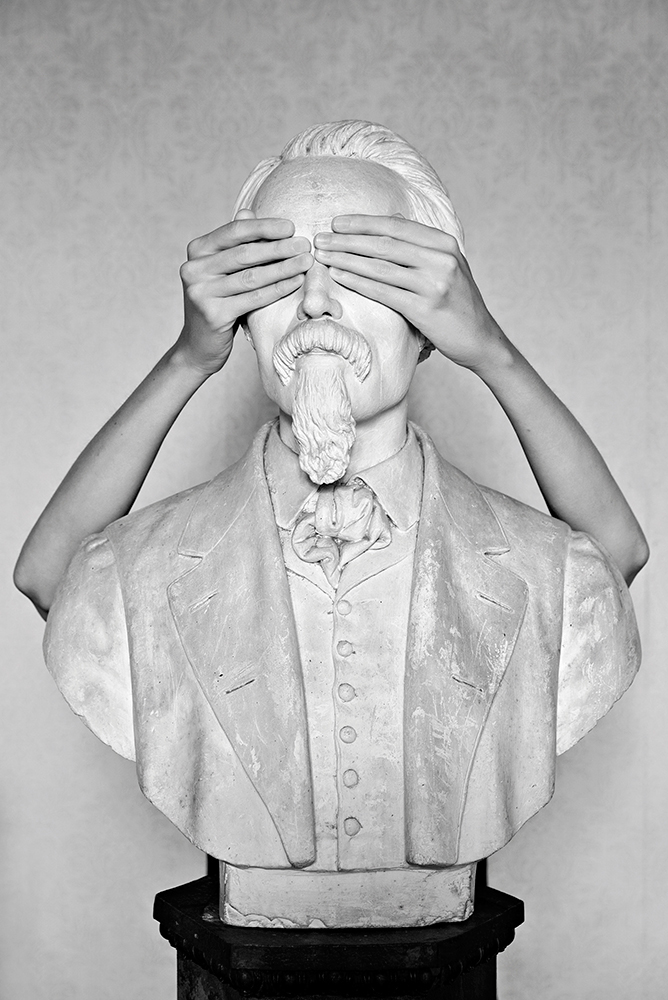 Francesca Catastini, Blinding an Anatomist with my own Hands, from the series The Modern Spirit is Vivisective, 2016, courtesy the artist

The eye being merely the matter of seeing; when seeing is removed the eye is no longer an eye, except in name – no more than the eye of a statue or of a painted figure.

Aristotle
De Amina, in The Collected Works of Aristotle
(trans. J. A. Smith), 4th Century BC

Knowledge is not made for understanding; it is made for cutting.
Michel Foucault
[1]

With this resolute stance Foucault wanted to emphasise the impossibility for the historian to be an uninvolved judge and the fact that knowledge, including historical knowledge, is a subjective perspective. A viewpoint in which Italian artist Francesca Catastini strongly believes. With her new series, The Modern Spirit is Vivisective, she embarks on a visceral and cutting-edge journey inside the human body, to play with and unmask misleading beliefs of the past. Catastini takes the anatomical theatres of the past as her starting point. The lost functionality of these spaces, suspended in a remote limbo between the carnality of death and the quest for knowledge, leads her to embrace dissection and vivisection, metaphorically, as an aesthetic performance.

Presented as a cornucopia of materials, her found photographs of old anatomy laboratories and blind students mingle with appropriated frontispieces of Renaissance anatomy manuals and her austere yet ironical images. Together, the materials form a telescopic structure divided into overlapping sections relating to the various actions involved in every vivisection operation: on looking, on touching, on cutting and on discovering. “I was thinking about a new project on museums and wanted to include in my research the ancient halls were anatomy lessons took place,” explains Catastini:

I had never visited one before and didn’t know where to find them. With Rembrandt on my mind, I thought they were all in the Netherlands. I was probably attracted by the way anatomy was studied and by the practice of public dissections, which took place nearly once a year in the main university cities of Italy and Europe from the Renaissance till the end of the eighteenth century. Public dissections were open to students, professors and dignitaries of the city and to paying audiences as well. [2]

Her title derives from the modernist manifesto of a young James Joyce, a former medical student, who, in his posthumously published Stephen Hero, praises vivisection as the most modern process one can conceive for the analytic artist. For him, vivisection is a method that, unlike its ancient form, which transformed and disfigured, ‘examines its territory by the light of day’. [3] Catastini was intrigued by dissection and vivisection as a quest for knowledge, in an era when physics was more linked to natural philosophy than to medicine per se. And she embarked on an anatomical journey, jumping back into the past, driven by the desire to see and know what is generally invisible, namely covered by the skin:

Anatomists of the past in order to study the anatomy of the body proceeded by dismembering the whole corpse into pieces. This is how they developed an idea of the body, only when it didn’t exist anymore as a whole, through its mental recomposition. [4]

She also became interested in the 16th-century anatomist Andreas Vesalius, particularly his notion of the perfect human body and his efforts to censure anomalies in the human body, ‘monstrosities’ that could have distracted the students’ attention. [5] Restless and curious, Catastini conducted detailed research. These findings are revealed in the form of analogies within the section ‘On Discoveries’:

The history of the study of anatomy has of course a strong phallocentric imprint. There was a great voyeuristic curiosity towards the female body. Female dissections always attracted a broader audience, not only because they were rarer—living women were initially excluded from this kind of event, so the only way for them to attend was as exhibited cadavers— but also due to the strong interest towards the mystery of reproduction and life, as a large number of illustrations inside anatomy manuals depicted pregnant women and the inside of their wombs. [6]

In exploring the female body, Catastini learned that, because anatomists didn’t have many opportunities to dissect women, especially pregnant ones, their first attempts to describe female anatomy were often misled by phallocentric interpretations and analogies. When she saw illustrations of the female reproductive organs in Vesalius’ De Humami Corporis Fabrica, she was amused to notice how, for Renaissance anatomists, it often seemed more sensible and practical to imagine the female genitals as a sort of ‘inward, internal penis’.
Catastini found a quote in Vesalius about the existence of the clitoris: he thought such a thing could only occur in hermaphrodites, as he had never seen ‘in any woman a penis or even the rudiments of a tiny phallus’. [7] The quote prompted her to associate Vesalius’ representation of the female genitals with a photograph of a Hellenistic sculpture of a hermaphrodite. Likewise, Vesalius’ illustration of the human placenta, presented as a well-decorated egg, reminded her of a Fabergé egg. And perhaps Vesalius was thinking about hens’ eggs: they offer nourishment, and the placenta’s purpose is to feed the fetus. A few months after her speculation, she came across this quote by Leonardo da Vinci:

Your arrangement shall be with the beginning of the formation of the child [putto] in the womb, saying which part of it is composed first and so on, and successively putting in its parts according to the duration of the pregnancy until birth, and learning in part from hen’s eggs how it is nourished. [8]

What had initially seemed to be the results of her personal and imaginary assumptions proved to be plausible observations, stemming from common beliefs that anatomists elaborated to give answers to irresolvable issues when they could not rely on observing the relevant subject matter directly.
The project sits at an interesting intersection between image and text. There is always a subtly subversive connection between the text that she carefully selects and the image that she associates with it. At times the connection is explicit and serves the purpose of enthusing the viewer to engage with an otherwise-cryptic image. While studying and deconstructing the symbol of medicine, for instance, Catastini found that the serpent-entwined rod wielded by the Greek god Asclepius, a deity associated with healing, perfectly epitomised Paracelsus’s idea that ‘poison is in everything, and no thing is without poison’—it’s the dosage that makes it either a poison or a remedy. [9] At other times, the image–text intersection is more subtle, speculative and ironically quixotic. This is clear in the illustration of an obstetrical examination in 1822 paired with Jacques Derrida’s quote ‘When our eyes touch is it day or is it night?’ [10] Elsewhere, the origin of her associations is more anecdotal: the juxtaposition between the image ‘Opening of spinal cord’ and ‘Female hands cutting an asparagus’ is an homage to Jason Fulford, a contemporary guru of photo-textualities who, during a workshop Catastini attended, asked her if the ‘Opening of spinal cord’ image was an asparagus.
Catastini’s voyeuristic contemplation swarms with surprise and wonder as she dares to arouse long-uncharted darkness, and culminates with her anatomising eye, turning inward, offering a portrait of the artist as both the eroticised victim of the surgeon’s scalpel and the vivisector with his quest for knowledge:

The self-portrait inside an anatomical theatre is one of the first photographs I took of this project. I was struck by some illustrations from renaissance anatomy manuals which depict living écorchés—a figure study showing the muscles of the body without skin—holding a knife and operating a self-dissection to show the inside of their own body to viewers. [11]

Francesca Catastini is an Italian artist based in Tuscany. Raised in a family with a strong scientific background, she developed an early interest for ethology and medicine. Having initially studied biology, Francesca went on to complete a MA in Photography and Visual Design in Milan in 2009. Her photobook The Modern Spirit is Vivisective, co-edited and with a text by Photocaptionist founding director, Federica Chiocchetti, won the 2016 ViennaPhotoBookAward and is published by AnzenbergerEdition. It will be launched at Polycopies during Paris Photo 2016, in collaboration with Salvatore Vitale of YET magazine, our cultural partner, on Saturday November 12 from 2pm, at Viasaterna in Milan on Tuesday November 22 from 7pm and at The Photographers Gallery in London on Thursday January 19, 2017.