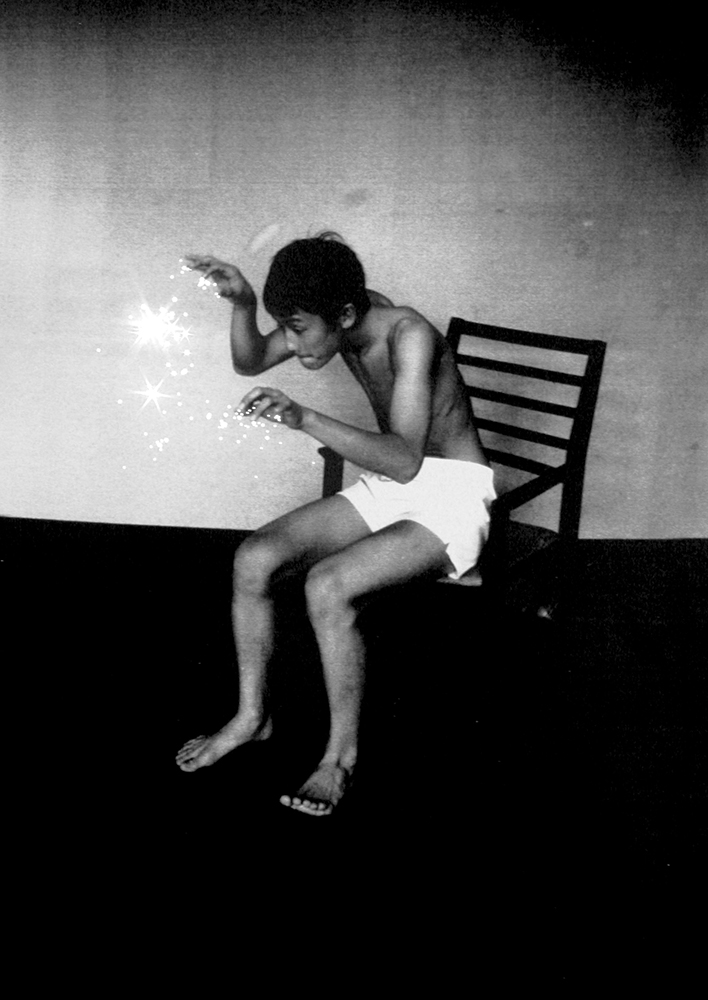 “Eh, he might not look it, but he’s a romantic” I thought, unable to hold the impulse of mockery inside me. A moment later, Hanai surprised me once again: he tore the cellophane wrapped around the bouquet and threw the flowers under a lorry travelling down the road. After the lorry passed by, a weirdly shaped stain remained on the road. I don’t know why but I thought about a streak of vomit of a beautiful woman, and while I was distracted by those murky and cruel colours, the silhouette of Hanai disappeared.

A river to cross, a shire to leave, a dark forest to get lost in: every fairy tale and hero’s journey begins with the crossing of a threshold, after which nothing will remain the same. The adventure begins in the ordinary world from which the hero must depart, venturing forth into a region of supernatural wonder, where he encounters fabulous forces and wins a decisive victory. The hero comes back from this mysterious adventure as a changed man or woman. The threshold marks the point of no return, the beginning of a journey that develops in both an outward as well as an inward direction.

In a series of four photographs that can be read as a tune, Lieko Shiga’s ‘piano player’ sits in an empty space, playing an imaginary piano, with flickering sparks shooting from his hands, like a personal pyrotechnical show, which might eventually engulf his genitals in white heat.

Yukio Mishima’s book Ongaku (The Music) is a psychoanalytical novel about a woman who suffers from frigidity and cannot ‘hear music’, a metaphor the reader comes to understand. Coincidentally the book was given to me some fifteen years ago by a girlfriend of mine who at the time was dealing with nymphomania and taking lithium. The inability of Mishima’s protagonist to experience orgasm was a dark mirror of my friend’s own curse of insatiable hunger. It was her favourite book and she was utterly unpredictable from one second to the next.

The piano in Shiga’s series is real, real enough to be played on. The photographer is painting the invisible, and we can hear the music in her player’s mind.

No! The piano is a delusion of its half-naked player, or worse, the photographer decided to make an uneventful series more interesting by introducing a gimmick.

Shiga’s subject is playing for himself rather than for an audience, can I imagine the tune he’s playing? When speaking about internal phenomena does the notion of right or wrong make any sense? Who’s to judge? Can I just have fun and sing along with him?

There is an unbridgeable gap between feelings and how they are shown. Once again Shiga’s imagery haunts the threshold between inner and outer world: all of her work inhabits this liminal territory between objectivity and subjectivity.

In all of its simplicity Shiga’s Piano series interweaves viewer, subject and photographer within the same game, reaffirming photography as a way to exteriorise an invisible internal world through visible external images.

The quote from Mishima’s novel is about being stupefied, about being unable to decipher the reactions of others once they stop acting according to our expectations. It’s about being turned inside out: what’s inside a human being is seldom pleasant to others once it spills onto the asphalt. Everybody is a stranger to himself and to everybody else. Personality is the tip of an iceberg which melts away, breaks and is reshaped once drifted out of its comfort zone. ‘First, abandon the world of pseudo-certainty’, as the 1970 title of the Provoke’s issue 4&5 goes.

Looking at Shiga’s Piano image, I see sparkles and I can hear music if I choose to ‘play along’ with the author and suspend my disbelief like an ideal reader. Most inward-looking photographers offer one-way tickets within their universes; how deep do I want to go? Will I feel love while riding Blind with my Date on a scooter in Bangkok? Will I cross the threshold of the Spiral Shore in Rasen Kaigan and bang my head against the thirty-eight rocks collected by the tsunami? Or will I keep flipping the pages of Shiga’s books from the comfort of my veranda, trying to make sense of an alien world from afar?

At the end of Ongaku, the main character finds peace: ‘I can hear music now, it never stops’.

Alex Bocchetto is a photo editor, a hand-made book designer and bookbinder, and a publisher. In 2012 in London, he established, with Valentina Abenavoli, the photobook and artist books publishing house AKINA which as of today has printed more than 20 titles. He runs a program of intensive workshops and lectures in collaboration with international partners such as the Paris Photobook club, the Book Case Study In Den Haag, The Photographers Gallery in London, ISSP School in Latvia, and Tokyo’s Reminders Photography Stronghold. He is currently working on a photo-poetic project whose title in progress is The Golden Age and you can follow him on his Instagram account @alex_akinabooks.