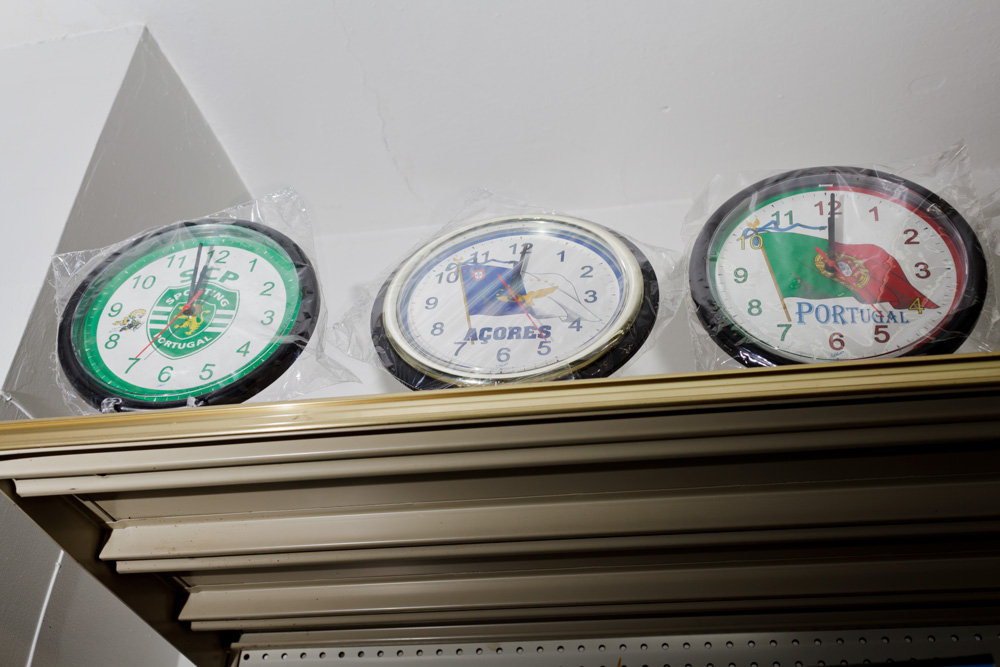 I realise I am about to negotiate my own sense of estrangement and attempt to factor in how my sentiments as a foreigner in a strange land might be mitigated by a space devoted to the preservation of culture from which I was born. [1] 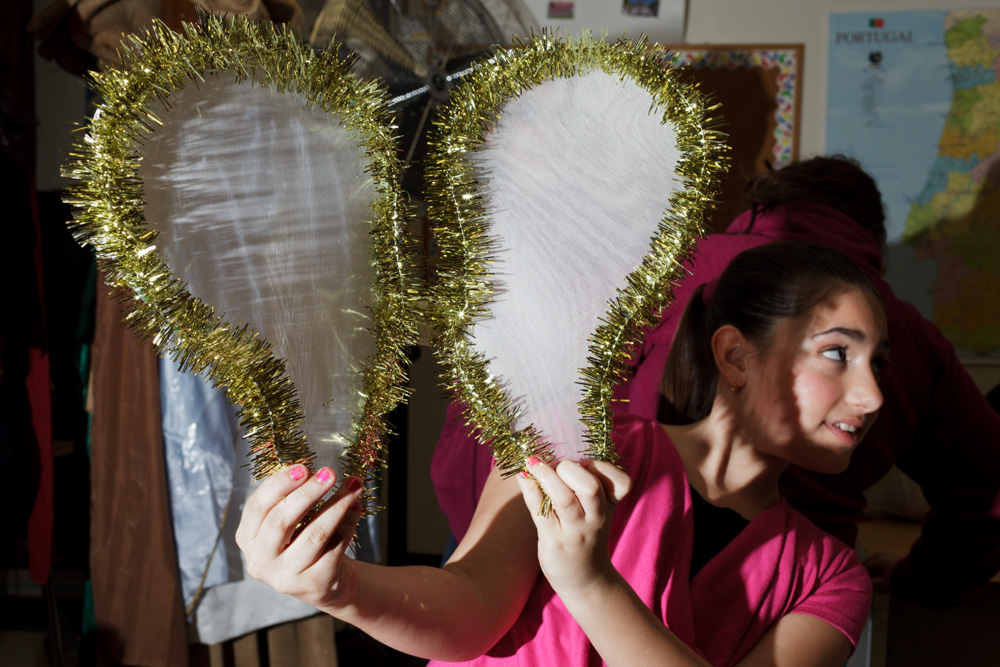 I search around for some sort of explanation; something that will nullify this disconnection. 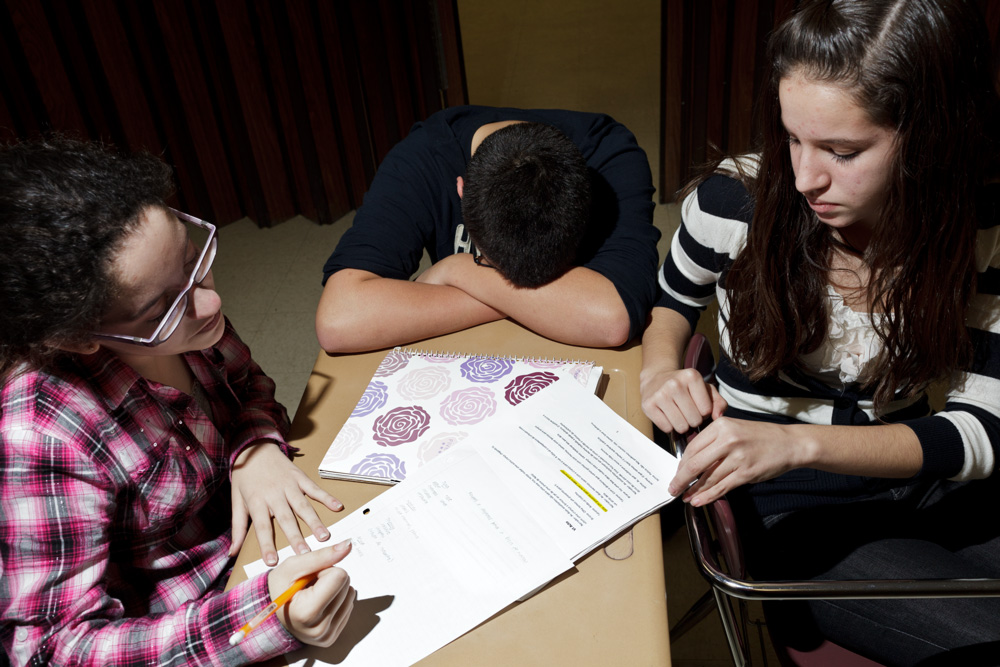 Lists were drawn and doubts noted. Language creates an order and uses it to its own version of things. 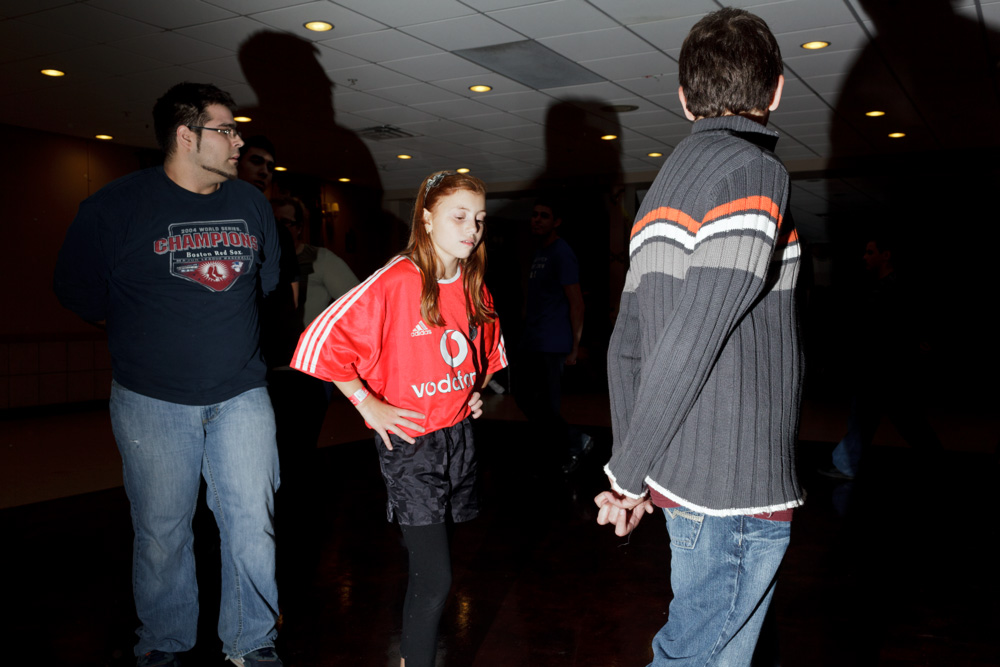 Most of the dancers have lost the mother tongue but their bodies belong to an obscured memory, obediently following trodden paths. 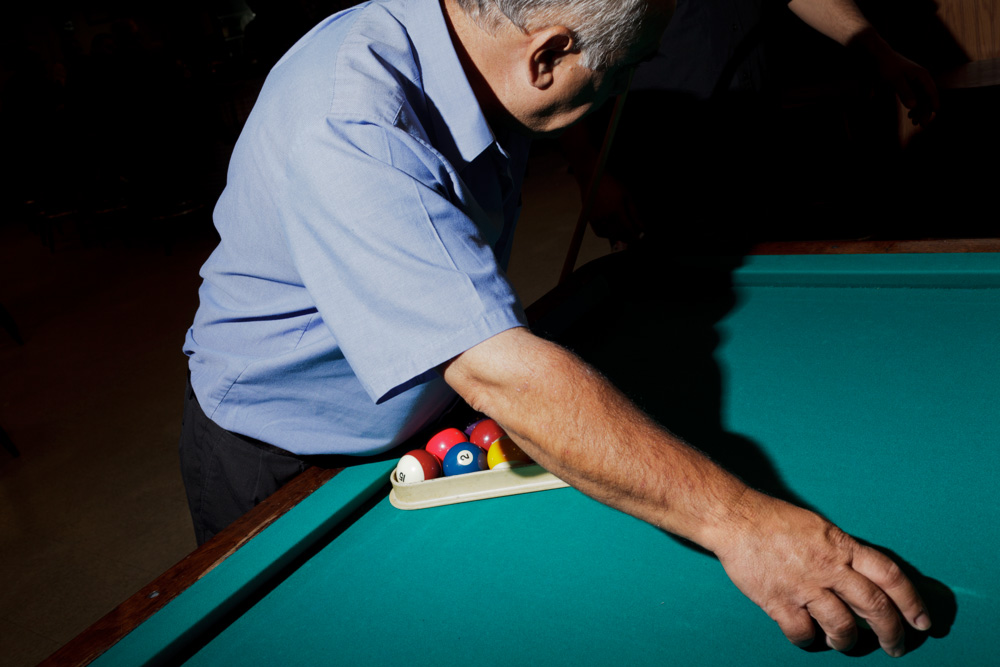 The color and numerical coding demand a shared knowledge of rules and regulations. Given a particular disposition, it is up to each player to assemble his or her own understanding of what is at hand and project an order onto the actions that will unfold. 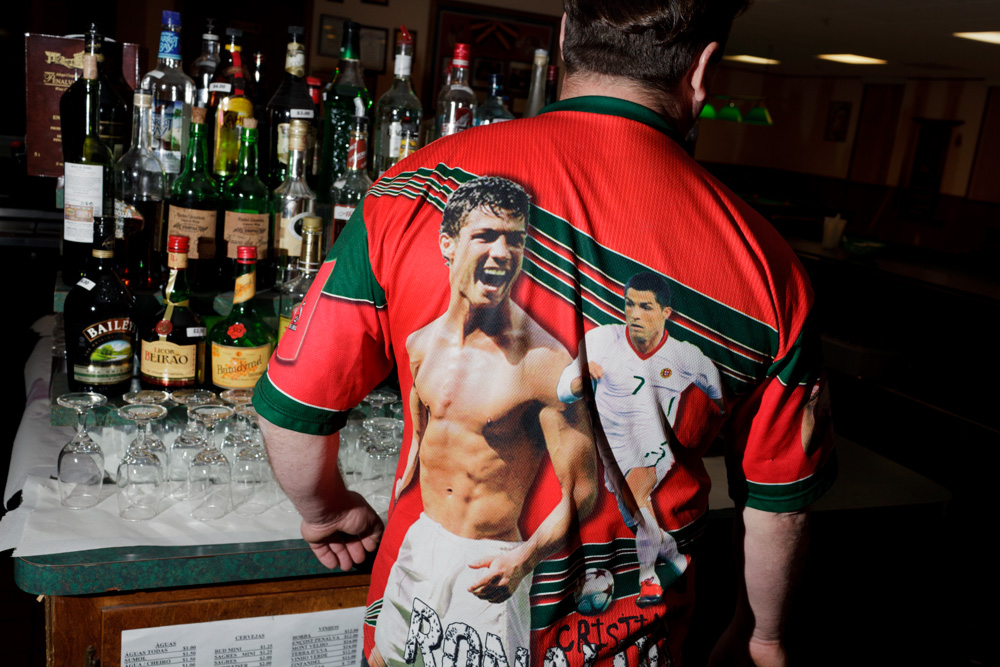 Patrons particularly appreciate the sense of order with which he arranged the bottles behind the bar, irrespective of their place of origin and sequenced alphabetically.

The arrangement is daunting and escapes any attempt to create a typology based on evidence. 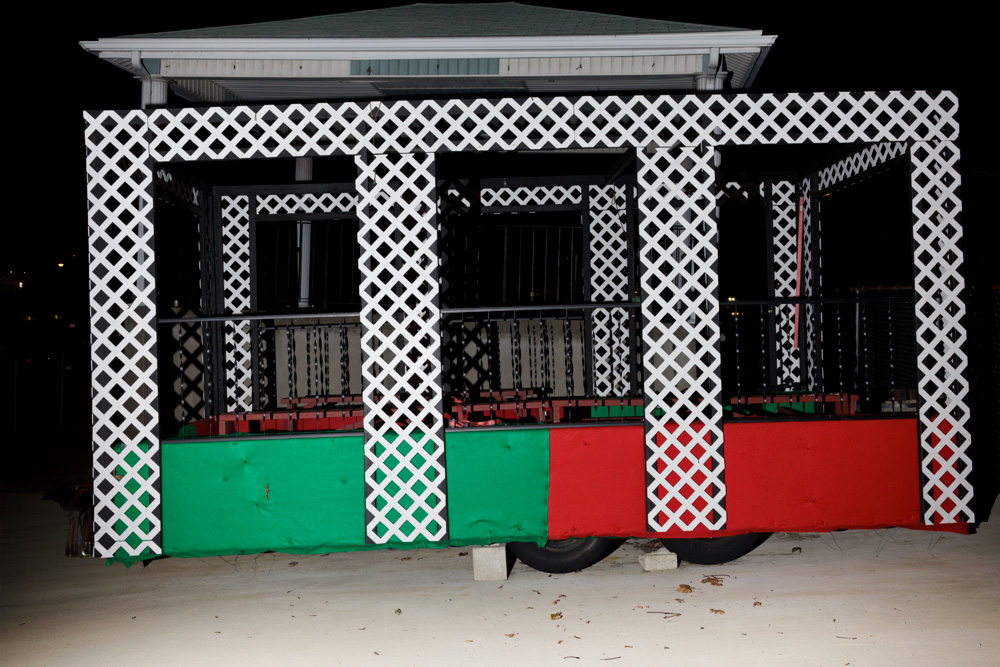 The act of picture taking has been re-centred and has ceased to be imbued with the urgency to tell and show everything there is in one single frame.

Although he had spent half of his life outside of Portugal — his country of origin ­— it was not until 2011 that Pedro Letria entered his first Portuguese Social Club. The Portuguese Social Clubs across the US bring together expats from Portugal and the Archipelago of the Azores, who, like Letria, are brought up with two cultures. For the next year, Letria photographed the inside of many other Portuguese Social Clubs in the greater area of Providence, Rhode Island, where the artist had moved.

The image that begins The Club, of a stage on wheels shored up by two cement blocks, is the only photograph in the book taken outdoors. Although the stage suggests the club as a space wherein culture is performed, what is pertinent more so, is that this moveable object is naturally imbalanced. The image can be read as a visual representation of the mutability of migrant identity and how it is reconciled on the grounds of the club. The series came out of the artists quest for affirmation, not necessarily of his Portuguese nationality, but of the disconnections he felt had punctuated his life away from home. Letria writes:

‘Watching as the chairs are placed on the tables and the floor is diligently mopped, I come to terms with the understanding that my impulse to photograph in the Portuguese Social Clubs arose from a desire to salvage the moorings of my identity and assuage the anxiety amplified by distance’.

On a superficial level, The Club reveals the individual beliefs and collective practices of a multicultural community. This is explored in the photographs and their descriptions, in the captions. Running throughout the book, however, is a longer text that questions the unstable nature of photography. The photographs and this essay are in many ways separate and out of balance. Yet, Letria’s critique of photography allows him to address, albeit indirectly, the topic of nationality. Quoting Craig Owens, who relates photography with ‘our desire to fix the transitory in a stable and stabilizing image’, Letria was frustrated by the photograph’s inability to reflect little else other than the visual details of its context.

In the same way that the members of the Portuguese Social Clubs had travelled across the continent away from their origins, Letria desires photography to transcend its own surface. The Club evolved in such a way as to enlarge and unhinge, firstly with Letria writing each caption from memory, then uploading it onto a blog — a virtual space, unconnected to any one place. The essay in the book was devised to disconnect the each photograph from the moment it was taken.

The result is a multi-layered photo-book, published by Pierre von Kleist Editions, that provides its reader with a choice of narrative, to free the photographs further. By offering two types of text that could be read alongside the photographs, The Club, unlike any other work featured on the Photocaptionist, defies the pairing of word and image.

Liza Premiyak is Associate Editor at The Calvert Journal. A graduate of the Critical Writing in Art & Design MA programme at the Royal College of Art, Liza writes across art, architecture and urbanism; although, on some occasion, she’s also produced the odd essay on pogonophobia (the fear of beards) or Stuart Brisley’s nose.

Pedro Letria is a Portuguese artist whose work reflects upon issues of displacement and belonging. His use of photography and text are a reflection on how image and language function alone, and once combined, establish an alternate discourse. Mirroring his own multi-cultural trajectory, his photographs have been widely published and Pedro Letria is the author of several monographs, including Mármore, from 2007. His work has been exhibited in venues such as the Centro Cultural de Belém, Portugal; Fundació Foto Colectanea, in Barcelona, Spain; Parc de La Villette, Paris, France; Galeria Olido in São Paulo, Brazil, and the Kunstlerhaus Bethanien, Berlin, Germany. His work is part of European public and private collections, such as the Portuguese Center of Photography, CAV, in Portugal and the BES Art Collection. With a B.F.A. from the School of the Art Institute of Chicago, Pedro Letria is a Fulbright scholar and a RISD M.F.A. Photography graduate. He has taught at Escola Superior de Arte e Design, in Caldas da Rainha, Portugal, since 2000.

[1] The words are by Pedro Letria. Here, especially paired with his images by Liza Premiyak for the Photocaptionist, they have been taken from both The Club‘s captions and main essay as a way to reconcile the two separate texts.