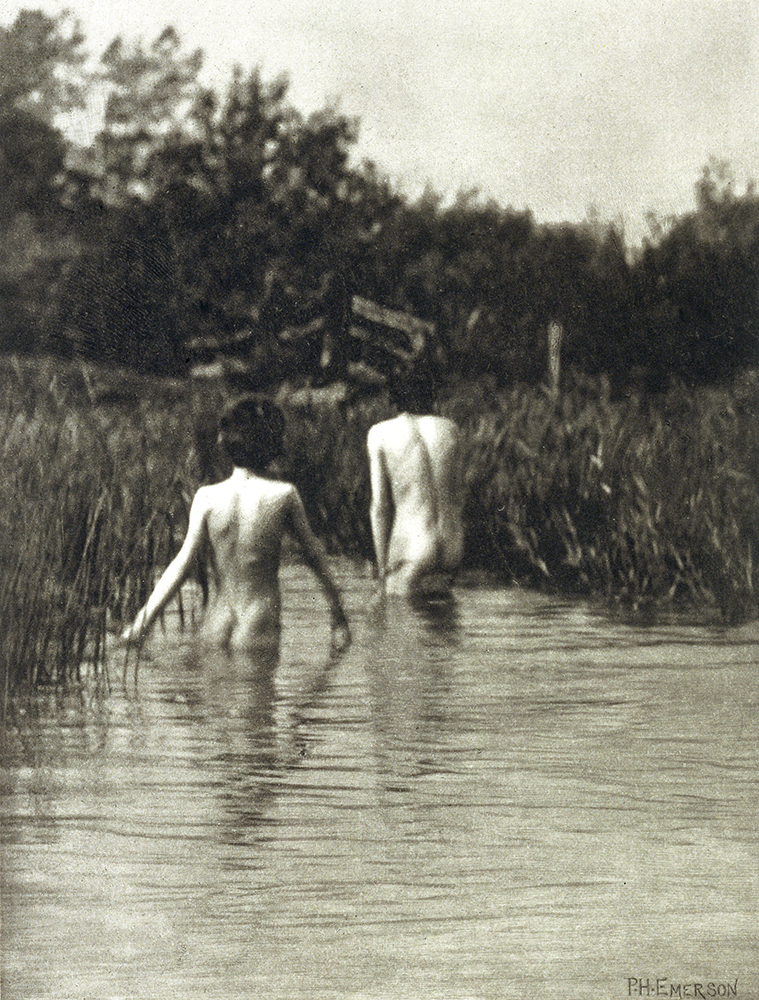 Every morning in summer we were wont to push our jolly-boat round to a secluded corner of the broad, in order to have a plunge in the cool water, and nearly always to the same spot came a group of merry, laughing village boys, who hastily undressing would wade out on the hard bottom and suddenly appearing through the rush would stand eyeing us… Their pleasures are few and simple, but after being among them, one is often led to ponder as to who is the happier – the cultured men of the town, or the ignorant inhabitant of the village.

Rarely has a photographer been as prolific a writer as P.H. Emerson (1856–1936). Born in Cuba on his family’s sugar plantation, he was at first sight the typical wealthy Victorian gentleman, yet he was also full of contradictions, as photography historians such as Nancy Newhall, John Taylor and Ian Jeffrey have noted. After studying medicine and embarking on numerous travels – including a revelatory visit to Rome, where he realised the “danger of divorcing art from Nature” – he devoted his life to photography and rural life in East Anglia from 1881 to 1895.

Defined by one critic as “ The Courbet of England”, Emerson argued vehemently for ‘truth’, publishing his seminal book Naturalistic Photography for Students of the Art in 1889 and using it to introduce the concept of selective focus. Inspired by early theories of perception, he wanted to preserve the way the human retina sees nature – not as sharply as a photographic lens. His fervent and public opposition to other, more “artificial” Victorian photographers, such as Henry Peach Robinson – who dared to betray Nature with the “sacrilegious” technique of combination printing – played out at the time on the pages of the British Journal of Photography.

Barely two years after Naturalistic Photography was published, Emerson recanted his view that photography was an art, but in one respect he remained consistent, always accompanying his images with his writing. At times as statistical as a bureaucrat’s prose, at others lyrical and poetic, his writing is the key to a better appreciation of his imagery and represents a landmark in terms of 19th century image-text intersections.

In Water-Babies, two young and naked bathers are captured while swimming and playing “through the weedy depths”. Emerson, who worked in collaboration with the painter TF Goodall – creator of the golden drawing of the ‘happy dwellers’ bathing in the Norfolk waters that featured on the Idyls of the Norfolk Broads portfolio cover – was mesmerised by their “graceful movements” and the simplicity of their lives. But he couldn’t resist closing his extended caption with his somewhat patronising comparison, setting the cultured man of the town against the ignorant village inhabitant.

Perhaps Emerson didn’t mean to denigrate anyone but his use of the word ‘ignorant’ jars uncomfortably with the magical atmosphere he has created. Abruptly bringing us back to the harsh reality of the East Anglian people, it disturbs the sense of the idyllic that he has otherwise worked hard to achieve. But maybe it can also be read as a hymn to the other alleged consequences of ignorance, in its literal sense of ignoring – of being unaware of the circumstances that surround us, and therefore immune to suffering.

Federica Chiocchetti is the founding director of the Photocaptionist. A writer, curator, editor and lecturer specialised in photography and literature, she curated the exhibition and symposium P.H. Emerson: Presented by the Author at Nottingham Castle Museum and Art Gallery while she was Art Fund Curatorial Fellow of Photographs at the Victoria and Albert Museum in 2015.

This feature was first published in The British Journal of Photography, in the November 2015 print issue, as part of the Photocaptionist’s guest editing of the Endframe column.