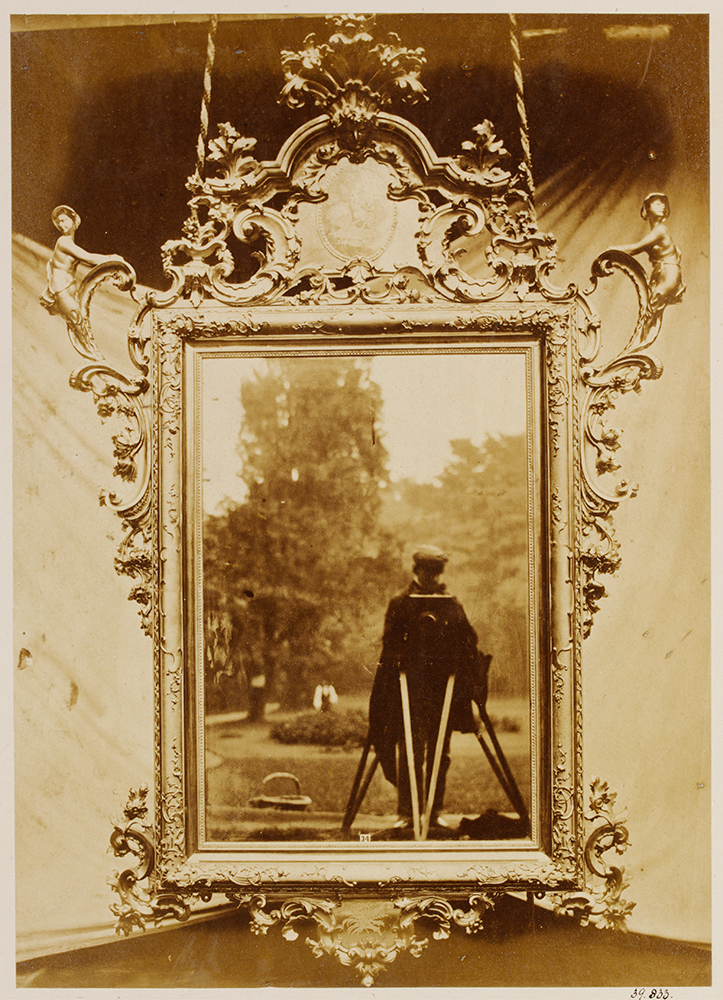 … But at this spark of man kindled on the immense landscape how the force of nature changed countenance, how, at this tiny coming, the eld receded, enlarged its borders, drew away from him, and the horizon arched its crest, developed the huge contours and implacable of a wave about to fall

I dare not turn my eyes from him, I dare not relinquish that threated pinpoint of being lest it should vanish out of the eld where all day the long sun has lit him crawling to and fro alone. I strain my ears for the assurance that he still lives, still turns the ints along the turnip grooves, slow, slow… Ah, how slow to go, who with each step drags after him this vast mantle of landscape, this once-velvet now threadbare and trailing to waste!

Sylvia Townsend Warner
Excerpt from A Man in a Landscape

A Self-Reflection in Landscape, by Bronwen Colquhoun

This photograph was taken by Charles Thurston Thompson (1816–68) in the grounds of Gore House, London. Showing a carved Venetian mirror, it was part of a commission to document a temporary exhibition of furniture loaned from the South Kensington Museum. Thompson had been appointed the first official photographer at the South Kensington Museum (which later became the Victoria and Albert Museum) in 1856, although he had been photographing there since 1853.

He photographed the mirror outdoors using natural light and a long exposure to record the intricate design of the frame. In doing so, he inadvertently captured the detail of the surrounding landscape in the reflection, along with himself and his camera. While Thompson may not have intended to make his reflection the focal point of the photograph, it surreptitiously becomes so through its position and framing.

Sylvia Townsend Warner (1893–1978) was a British writer whose career spanned over half a century. A versatile writer, she produced numerous poems, short stories and novels, often reflecting the Dorset and West Country landscape she called home. Her poem, A Man in a Landscape, is a powerful observation of the symbolism of human presence and the way it may be used for understanding one’s own existence in the world. It also highlights how visual cues support or modify our understanding of images. With this in mind, her poem may be used as an alternative narrative for Thompson’s photograph, both in a literal and an abstract sense.

Warner suggests that the presence of a man allows the author to make sense of the landscape by making it real. The figure offers a view of the world that can only be defined and articulated by human presence. In other words, it is the figure that brings meaning to the landscape, to its borders, contours and horizon. The figure completes the picture; without it, the landscape – and the poem – descend into a series of numbers and objects that have no meaning by themselves. To an extent, the same applies to photography.

Drawing on the personal and the familiar is a common approach to creating meaning around images, the traces of human presence allowing the viewer to make sense of a scene. The presence of the photographer changes that reading, both visually and symbolically, transforming the photograph from a document into a self-portrait or a picture.

In the final stanza of the poem, the author strains hard not to lose sight of the figure she has encountered, implying that if she does so, the landscape and her own presence within it will cease to exist. Through the act of photographing, Thompson captures the landscape, the moment, the memory and his own presence for posterity. In doing so, the picture and everything it signifies becomes embedded and ingrained within the photograph, forever.

Bronwen Colquhoun is the Senior Curator of Photography at the National Museum Wales. Her PhD, awarded from Newcastle University in 2015, examined how the photo-sharing website Flickr: The Commons supports community engagement and builds new knowledge and meaning around historic photographic collections. She has worked at the Library of Congress, the Northern Gallery for Contemporary Art, English Heritage and volunteered at the National Media Museum.

This feature was first published in The British Journal of Photography, in the September 2015 print issue, as part of the Photocaptionist’s guest editing of the Endframe column.